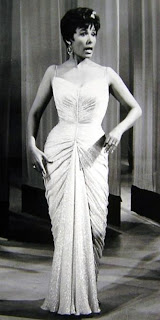 On this day in ...
... 2010, Lena Horne died in a Manhattan hospital. She'd been born 92 years earlier in the next borough over, in Brooklyn, to a family with African, European, and Native American ancestors. She grew up in New York and Georgia. While still a teenager, she joined the chorus line at Harlem's Cotton Club, thus beginning her trail-blazing career in entertainment. In the early 1940s she became


'the first black woman to sign a meaningful long-term contract with a major studio, a contract that said she would never have to play a maid.'

(credit for 1964 photo of Horne) Horne also was known as a civil rights activist, speaking out for black servicemembers during World War II, filing race-discrimination suits against restaurants, and joining Eleanor Roosevelt in campaigning, without success, for a federal law against lynching.