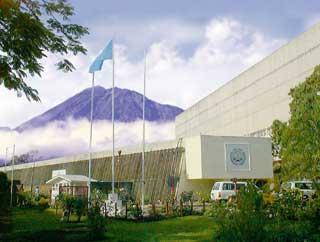 As previously blogged about here, the judgment issued by the International Criminal Tribunal for Rwanda (left) in Prosecutor v. Karemera et al. in February of this year is, in some ways, “a milestone for international justice.”
In that case, Édouard Karemera, the Minister of the Interior in the Interim Government from May to July 1994, and Mathieu Ngirumpatse, the President of the Mouvement Révolutionaire National pour la Démocratie et le Développement (MRND) party, were held criminally responsible for, among other things, rapes and sexual assaults committed on a large scale against Tutsi women and girls throughout Rwanda by members of the Interahamwe, other militiamen and members of the Civilian Defence Program.  Although neither was charged for having physically committed the rapes or sexual assaults, both were convicted:
►  On the basis of the doctrine of superior responsibility, for failing to prevent the crimes and/or punish their subordinates for committing them; and
►  Under the “extended form” of joint criminal enterprise (JCE) liability, which permits the tribunal to hold perpetrators accountable not only for the crimes originally intended by a group of co-perpetrators, but also for other crimes that were the natural and foreseeable consequences of the intended crimes, as long as the accused were aware of the risk that such crimes were likely to be committed and willingly took the risk.
Curiously, however, the Trial Chamber found that the evidence did not support a finding of liability for the rapes and sexual assaults under the “basic form” of JCE, which allows an accused to be held responsible whenever he or she intentionally takes part in criminal conduct with a plurality of actors.  It is difficult to understand the Trial Chamber’s conclusion that the evidence did not “expose[] a shared intent by JCE members to cause seriously bodily or mental harm by raping and sexually assaulting Tutsis” (¶ 1456), particularly in light of its findings regarding the accused’s knowledge and indifference to widespread acts of sexual violence during the genocide in Rwanda.  For instance, the Trial Chamber found at ¶ 1482 that despite the fact that Ngirumpatse was out of the country during part of the genocide,

The Chamber made similar findings with respect to Karemera, with the exception that Karemera was actually in the country during the entire period of the genocide and had told the court that he assumed women would be raped.  Further, the Chamber found that both accused “continued to participate in the JCE to destroy the Tutsi population of Rwanda despite the widespread occurrence of rapes and sexual assaults on Tutsi women and girls.”  (¶¶ 1483, 1486) In light of these findings, it is unclear why the Chamber characterized these crimes as natural and foreseeable consequences of the intended crimes rather than part of the original or an expanded JCE.
Notably, the approach of the Karemera Trial Chamber stands in contrast to the 2006 judgment of the Trial Chamber of the International Criminal Tribunal for the Former Yugoslavia in Krajišnik.  At ¶ 1098, the ICTY Chamber emphasized:

Although the ICTY Appeals Chamber later reversed the Trial Chamber’s findings with respect to the accused’s liability for the expanded crimes, it did so because the Trial Chamber failed to make specific findings regarding, among other things, when leading JCE members became “aware” of the commission of expanded crimes.  Indeed, the Appeals Chamber explicitly noted that the Trial Chamber’s approach – of deriving intent to commit the expanded crimes from “‘acceptance of the actual commission of new types of crime and continued contribution to the objective’” – did not constitute an error of law.  (¶ 200)
Why does the characterization of the accused’s responsibility matter?
After all, the accused in Karemera were convicted of rape as a crime against humanity and genocide based in part on the rapes and sexual assault.
It matters because the extended form of JCE liability is vulnerable to critique.
Indeed, while the ad hoc tribunals have relied on this mode of liability to find perpetrators – particularly top political or military leaders – accountable for crimes of sexual violence, commentators have argued that this form of liability holds individuals liable for conduct too distant from the actions of the accused, endangering “the principle of individual and culpable responsibility by introducing a form of collective liability, or guilt by association.”
Thus, even though this mode of liability has been useful in holding perpetrators of sexual violence accountable, it is unclear whether and to what extent it will continue to be used successfully to prosecute such crimes.
More significantly, it often does not reflect the reality on the ground. As the Karemera Trial Chamber notes, sexual violence in Rwanda was committed “in the context of a campaign to destroy the Tutsi population in Rwanda.” (¶ 1475) As is painstakingly detailed in the judgment (¶¶1337-1424), the evidence heard by the Chamber shows that Tutsi women and girls were subjected to widespread rapes and sexual assaults by persons attacking Tutsis as a group and during the period when Tutsis were being assaulted as a group. Significantly, sexual violence was often committed in public and accompanied by derogatory remarks about Tutsis. Further, victims of sexual violence were frequently killed after being sexually assaulted.
When sexual violence is seen in the broader context in which it occurs, it is clear that it can and often does contribute to a perpetrator’s goals of destruction or persecution not only of the survivor but also of the group or community to which she belongs. Thus, sexual violence, when committed in this context, is more accurately characterized as part of the original (or expanding) JCE, not just as a foreseeable crime resulting from the original JCE. Understood this way, sexual violence crimes that at first might not appear to be part of a group’s common criminal purpose are properly characterized as such, thereby avoiding the need to rely on the more controversial “extended” form of JCE liability.
by Susana SáCouto at 7:00 AM