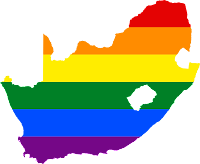 'The state may not unfairly discriminate directly or indirectly against anyone on one or more grounds, including race, gender, sex, pregnancy, marital status, ethnic or social origin, colour, sexual orientation, age, disability, religion, conscience, belief, culture, language and birth.'

This Constitution, effective in 1997, is the post-Apartheid Constitution. As the government itself boasts,


'South Africa’s Constitution is one of the most progressive in the world and enjoys high acclaim internationally.'

The progressive reputation of the South Africa Constitution is well-deserved, and it is based in part as being the first Constitution to explicitly recognize equality on the basis of sexual orientation.
Interpreting this provision, the highly respected South Africa Constitutional Court has declared sodomy laws unconstitutional, has declared the limitation of marriage to opposite-sex couples as unconstitutional, and recognized family rights for same-sex couple parents. My own recent scholarship on these developments is here and here. (credit for South Africa rainbow map)
But the inclusion of sexual orientation has re-emerged as a controversial issue.


'This means that the various Parliamentary caucuses of political parties represented in Parliament will soon have to decide whether they support unfair discrimination against people they might believe are not like them, or whether they will affirm their commitment to non-discrimination and the respect for the human dignity of all South Africans, the very bedrock on which the Bill of Rights in the South African Constitution is founded. . . .'

De Vos' analysis is worth reading in full.
Coupled with recent controversies surrounding the composition of the South Africa Constitutional Court, about which I posted a while back, this is alarming news indeed, and threatens South Africa's status as a constitutional democracy that is "one of the most progressive in the world."

(Cross-posted at Constitutional Law Prof Blog)
by Ruthann Robson at 7:00 AM