(Another of IntLawGrrls' several posts on the Charles Taylor judgment, part of our Sierra Leone accountability series)

In 2003, the Prosecutor of the Special Court for Sierra Leone (SCSL) charged Charles Taylor with three counts of gender-related violence: the crimes against humanity of rape and sexual slavery, and the war crime of outrages upon personal dignity (Original Indictment). Specifically, he was accused of responsibility for offences occurring between November 30, 1996 and about January 18, 2002, carried out by members of the Revolutionary United Front (RUF), Armed Forces Revolutionary Council (AFRC), AFRC-RUF junta and/or Liberian fighters in Kono District, Kailahun District and Freetown and the Western Area. (map of Sierra Leone's Districts, below right; credit) These forces were alleged to have raped women and girls, both in their camps and in civilian areas, and to have abducted women and girls throughout Sierra Leone and brought them to these areas to serve as sexual slaves (paras. 14-17, Second Amended Indictment).
Nine years later, Taylor has been found guilty of aiding and abetting these crimes through the provision of arms and ammunition, military personnel, operational support and moral support (paras. 152- 165, Judgment Summary). He was also held liable for planning these crimes (paras. 172-177). 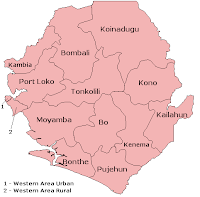 As I argue in a recently published book chapter titled “Contextualizing Sexual Violence in the Prosecution of International Crimes” in Morten Bergsmo (ed.), Thematic Prosecution of International Sex Crimes, sexual violence taking place during conflict or mass atrocities is usually part of a wider picture of complex victimization. Rape, sexual slavery, sexual mutilation and other similar acts are often accompanied by, or intersect with, other prohibited acts. For example, sexual violence crimes may have occurred alongside or be used to facilitate the crimes against humanity of murder, enslavement, torture or persecution. As well, seemingly gender-neutral prohibited acts may have been carried out in gender-specific ways or may have gendered outcomes. For these reasons, conscious contextualization of sexual violence within international criminal prosecutions is crucial: by pursuing investigations and prosecutions in which sexual violence is explored in and of itself and within the context of other genocidal acts, crimes against humanity or war crimes, both the serious nature of sexual violence and the potentially gendered nature of other crimes can be highlighted and understood.
In the Taylor trial judgment, and in the RUF trial judgment, the SCSL examined sexual violence and gender-based violations up close, and also in the wider context of how they contributed to the RUF’s goal of terrorizing the civilian population into submission. In doing this, both trial judgments better explain the role and effects of gender-based violence.
Interestingly, Trial Chamber II's explanation in the Taylor Judgment Summary of the role of sexual violence in the AFRC/RUF's campaign of terror can be contrasted with its view in the AFRC trial judgment.
As Jennifer Easterday pointed out in her post yesterday, in that judgment, Trial Chamber II held that sexual slavery was not an act that could be included under the crime of terrorizing the civilian population because sexual slavery was a crime of opportunity not committed with the intent to cause fear in the civilian population. According to Trial Chamber II, sexual slavery “was committed by the AFRC troops to take advantage of the spoils of war, by treating women as property and using them to satisfy their sexual desires and to fulfil other conjugal needs” (para. 1459). In my view, the Chamber's finding in the Taylor Judgment Summary was the more accurate conclusion.
While we do not yet know the details of the Court's reasoning, it is clear that Taylor's conviction on the basis of aiding and abetting, or planning, from afar is groundbreaking in the annals of jurisprudence on gender issues. Over at CharlesTaylorTrial.org and the Open Society Foundations blog, IntLawGrrl Kelly Askin commented:


'The Taylor verdict represents a welcome and long overdue recognition that civilian or military leaders who are far from the battlefield but who support and encourage sexual violence, or make no attempt to prevent or punish it, can be held responsible for sex crimes. Leaders have frequently been held accountable for murder, pillage, torture, and countless other crimes committed by others, but courts have shown great reluctance to hold them responsible for sex crimes, treating them as a mere inevitable by-product of armed conflict, not a powerful weapon of war. The Taylor judgment is a major victory for gender justice worldwide. Notably, two of the three trial chamber judges were women with experience of presiding over trials involving gender justice crimes.'

Like many others, I look forward to reading the full judgment, as I believe that it will shed quite a bit more light on how Trial Chamber II came to the conclusions it did – including on the gender-related evidence. Once the judgment is released, undoubtedly IntLawGrrls will have further observations to make for this Sierra Leone accountability series...
by Valerie Oosterveld at 6:00 AM