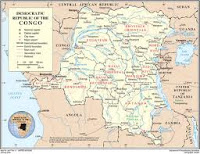 Today, the Appeals Chamber of the International Criminal Court (ICC) unanimously dismissed the prosecution appeal in the Mbarushimana case. The Prosecutor had charged Callixte Mbarushimana with responsibility for a range of crimes against humanity and war crimes carried out by the Forces Démocratiques pour la Libération du Rwanda (FDLR) in the Democratic Republic of the Congo. The FDLR have been described by the ICC’s Prosecutor as “the most recent incarnation of Rwandan rebel groups established by former génocidaires who fled Rwanda after the 1994 Rwandan genocide”. Mbarushimana was accused, under art. 25(3)(d) of the Rome Statute, of playing a leading role in the FDLR from his base abroad. He was accused of contributing to the implementation of a common plan to attack the civilian populations of the DRC’s North and South Kivu provinces (see map at right) in 2009, using murder, widespread and brutal rape, torture and destruction of property to “blackmail the international community and to extort concessions of political power in exchange for ending atrocities”.
This case was supposed to be a very important one for the ICC with respect to gender justice. The FDLR are well known to use sexual and gender-based violence on a large scale to terrorize and control the population. For example, the ICC’s Decision on the Prosecutor’s Application for a Warrant of Arrest detailed how the FDLR used rape to punish women and girls suspected of collaborating with opposing forces; raped women and girls before killing them; raped pregnant women, causing them to miscarry; forced civilian boys to rape civilian girls; killed women and girls who resisted rape; and sexually mutilated women and girls during and after rape – for example, by inserting sticks into their vaginas and cutting open the wombs of pregnant women. The charges against Mbarushimana reflected this: the case against Mbarushimana contained the broadest range of charges of gender-based crimes against any ICC suspect to date, including – for the first time in an international criminal tribunal – the crime against humanity of gender-based persecution. The Prosecutor described the case as a “crucial step in efforts to prosecute the massive sexual crimes committed in the DRC”, where over 15,000 cases of sexual violence were reported in 2009.
However, this did not turn out to be a case for the annals of gender justice. In December 2011, a majority of Pre-Trial Chamber I declined to confirm the charges against Mbarushimana. They found that there was not sufficient evidence to establish substantial grounds to believe that Mbarushimana could be held criminally responsible. In particular, they found that there were no substantial grounds to believe that the FDLR leadership constituted a ‘group of persons acting with a common purpose’ and that Mbarushimana did not provide any contribution to the commission of such crimes (paras. 29 and 292).
The Prosecutor appealed. He argued, inter alia, that the Pre-Trial Chamber may not deny the confirmation of charges by resolving inferences, credibility doubts and perceived inconsistencies against the Prosecutor, and that the Chamber erred in finding that it may evaluate the credibility of witnesses. The Appeals Chamber rejected these arguments: “Any other interpretation would carry the risk of cases proceeding to trial although the evidence is so riddled with ambiguities, inconsistencies, contradictions or doubts as to credibility that it is insufficient to establish grounds to believe the person committed the crime charged” (para. 46). The Prosecutor also argued that the Pre-Trial Chamber imposed a higher level of contribution than is required under art. 25(3)(d) of the Rome Statute, but a majority the Appeals Chamber found that, even if it would agree with the Prosecutor, “it would not reverse the Impugned Decision because the error would not have materially affected the decision” (para. 66).
This case raises significant questions as to how the ICC's Prosecutor investigates, frames and charges gender-based crimes against individuals removed from the scene of the crimes.
In a thoughtful analysis of the weaknesses of the Prosecutor’s approach in this case, the NGO Women’s Initiatives for Gender Justice concluded that the Mbarushimana decisions are indicative of deeper problems: “more than half of all charges for gender-based crimes which reach the confirmation stage are not being successfully confirmed[;] no other category of charges before the ICC faces this level of dismissal and contention.”
The ICC’s Office of the Prosecutor (OTP) has issued a short statement in response to the Appeals Chamber’s decision: “The OTP takes note of today’s decision by the Appeals Chamber. We are evaluating the decision to see whether it is possible to present a new case against Mr. Mbarushimana presenting additional evidence, in accordance with the Judges’ ruling.” If the prosecution does present a new case, it will need to do so having addressed its weaknesses in investigating, framing and charging gender-based crimes.
by Valerie Oosterveld at 5:00 PM