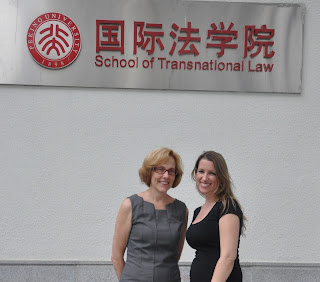 SHENZHEN, China – Greetings from this bustling city, which didn't exist 20 years ago yet now has a population of 15 million.
Located on the mainland just across the border from Hong Kong, Shenzhen is also the home of Peking University School of Transnational Law, started 4 years ago as part of the century-plus-old Peking University system. Teaching classes in English to a student body that's mostly Chinese, STL, as insiders call it, is the 1st school in China to award an American-style J.D. The 1st class, of 53 students, will graduate later this month.
The picture above was made made by law school staffer Kim Zhong on Thursday, when I had the honor of delivering a public lecture entitled "Responsibility and the International Criminal Court." (The talk built on ideas in my essays recently placed on SSRN, here and here.) At right is Professor Jaime L. Dodge, a colleague of mine at Georgia Law and a Visiting Professor of Law at STL this summer. An expert in dispute resolution law, Jaime's teaching a course on class actions. 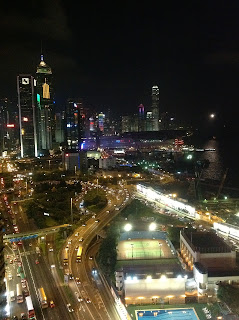 It was great to meet with students, faculty, and staff at STL, including Associate Dean Stephen Yandle, who as a Northwestern dean years ago had a hand in admitting yours truly to law school, and Jeff Lehman, STL's Chancellor and founding Dean. While staying on as STL Chancellor, Jeff soon will move north to lead a new educational venture, NYU Shanghai. Aimed at undergraduate education, it will be the 1st comprehensive liberal arts and sciences research university in China launched in partnership with an American university.
As for this 'Grrl, it's Hong Kong (right) for the weekend, then back to the mainland.
by Diane Marie Amann at 6:33 PM