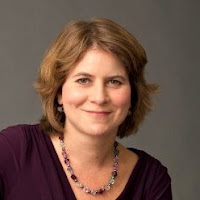 It's our great pleasure today to welcome Rosa Brooks (left) as an IntLawGrrls contributor.
Professor of Law at Georgetown University Law Center in Washington, D.C., Rosa focuses her teaching and scholarship on issues related to international, human rights, foreign relations, and national security law. She also serves as a Bernard L. Schwartz Senior Fellow at the New America Foundation. (photo credit)
From 2009 to 2011, Rosa served as Special Coordinator for Rule of Law & International Humanitarian Policy at the U.S. Department of Defense, and also as Counselor to Michèle A. Flournoy, then the Under Secretary of Defense for Policy. She received the Secretary of Defense Medal for Outstanding Public Service.
Before entering government, Rosa (prior posts) held a number of positions: author of a weekly Los Angeles Times column; faculty director of Georgetown's Human Rights Institute; Special Counsel at the Open Society Institute; and Associate Professor at the University of Virginia School of Law; Senior Advisor at the U.S. Department of State; consultant for Human Rights Watch; and Fellow at the Carr Center at Harvard's Kennedy School of Government; and Lecturer at Yale Law School. She's been: a board member of Amnesty International USA and of the National Security Network; a term member of the Council on Foreign Relations; an Executive Council member of the American Society of International Law; a member of the World Economic Forum's Global Agenda Council on Fragile States; and a steering committee member of the White Oak Foreign Policy Leaders Project.

Rosa earned a bachelor's degree in history and literature from Harvard, a master's degree in social anthropology from Oxford, and a law degree from Yale.
Her many publications include Can Might Make Rights? The Rule of Law After Military Interventions (2006), coauthored with Georgetown Law Professor Jane E. Stromseth and Minnesota Law Dean David Wippman.
In March, Rosa presented at "Military Intervention and the Law of Peace," the plenary panel that opened the March 2012 annual meeting of the American Society of International Law. Copanelists Patricia O'Brien, the Under-Secretary for Legal Affairs and the U.N. Legal Counsel, along with Melbourne Law Professor Anne Orford, already have honored us by posting versions of their remarks. Today Rosa does the same. Her introductory post below begins a 2-part exploration (Part 2 is here) of parallels between the concept of responsibility to protect, as developed in the human rights community, and prevention of terrorism, as developed in the national security community.
Heartfelt welcome!
by Diane Marie Amann at 6:00 AM