Lessons in Truth and Reconciliation 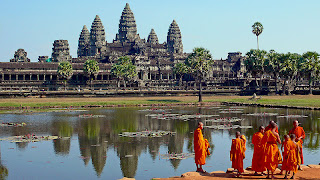 On Friday, my friend and longtime colleague John Ciorciari and I posted on SSRN our forthcoming article, "Lessons from the Cambodian Experience with Truth and Reconciliation."  We wrote the piece for a symposium, Implementing Truth and Reconciliation: Comparative Lessons for Korea, hosted last October by the Baldy Center for Law and Social Policy at the University at Buffalo Law School, the Buffalo Human Rights Center, and the UB Asian Studies Department.  The conference brought together South Koreans who had worked in and studied the numerous truth commissions in their country as well as scholars of Cambodia, Peru, and South Africa to offer comparative lessons based on the experience of those countries with truth and reconciliation.
As John and I note, Cambodia may at first appear to be a counter-intuitive case study as it has never convened a formal truth and reconciliation commission.  Despite this lack of an officially sanctioned process, the Cambodian experience can offer useful lessons for South Korea and other states seeking redress for past human rights abuses.  We start from the understanding that social processes leading to reconciliation are necessarily different in different societies, but note that the Cambodian case may be most helpful as an example  for countries navigating the complex politics that generally characterize transitional justice process.
Our paper presents two central claims about the Cambodian experience.  First, the case of Cambodia demonstrates the importance of engaging local civil society to play a central role in truth and reconciliation efforts.  In countries such as Cambodia where political elites prioritize their own power over the needs of ordinary survivors, these leaders tend to subordinate certain truths and pursue a shallow form of reconciliation that privileges their narrow interests.  Though civil society generally has fewer resources and less formal authority than the government in creating truth and reconciliation initiatives, it often has the advantage of being more responsive to societal interests and less encumbered by political gridlock generated by competition among domestic political parties and international actors.  In the paper, we offer examples of local NGO-driven truth and reconciliation initiatives, and suggest that the growth of local (rather than international) groups in addressing reconciliation issues may help to establish a more robust civil society that can contribute to deliberative political processes and a more stable democratic future.
Second, the Cambodian example is useful in exploring questions of institutional sequencing in transitional justice efforts.  Accountability for mass human rights abuses necessarily involves political and social dialogue about what goals to pursue, through what institutional mechanisms, and in what order.  We note that the political space for pursuing truth and reconciliation initiatives has broadened over time in Cambodia, where official efforts initially focused on solidifying peace and only later turned to questions of justice.  In particular, mechanisms that are not aimed primarily at promoting truth and reconciliation may act as a launching pad for truth and reconciliation processes in other forms.  We suggest that the Khmer Rouge Tribunal, though not an ideal vehicle for truth and reconciliation, has helped to create the political space for individual Cambodians and civil society organizations to establish important and innovative truth and reconciliation measures.  These include creating accessible archives, providing human rights education, and rewriting official history books.
Cambodia offers at least two lessons for states seeking to implement truth and reconciliation initiatives -- a focus on the importance of engaging civil society and the perhaps unexpected benefits that can be derived from particular institutional sequences.

(credit for photo of Angkor Wat above left)
by Jaya Ramji-Nogales at 5:00 AM