Litigation as a measure of well-being

In the United States portraying litigation as pathological is a key component of business lobbying groups’ social construction of the legal system. They commission and use questionable social science analysis and misleadingly portray highly publicized cases, such as the McDonald’s coffee spill case. They do so to help characterize civil litigation as dominated by lottery-seeking plaintiffs, greedy plaintiff’s lawyers, and state civil justice systems that are too hostile to business. Together with my co-authors, Ted Eisenberg is 93% 67% in 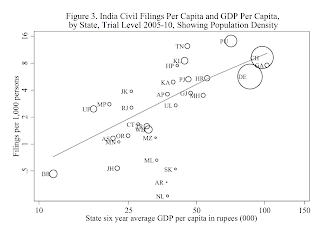 Another surprising result was that litigation growth has slowed in the last five years in Indian states (see Figure 12 above from p. 30 of the article). Moreover, courts with higher backlog have had proportionately less growth in litigation rates. This raises the question whether Indian economic growth can be sustained without the well-functioning courts. India’s challenge is not that too many cases are filed but that too few are timely adjudicated. In addition to processing cases faster, other systemic problems within the court system must also be addressed by the Indian government including poor court infrastructure, vacancies on the bench, and corruption.