A 2011 documentary about the quest for human rights accountability in Guatemala makes its television début this Thursday.
Titled Granito: How to Nail a Dictator, the film was made by IntLawGrrls contributor Pamela Yates. As she described it in a prior IntLawGrrls post, Granito, which refers to the "grain of sand" contribution that every person can make to social change, 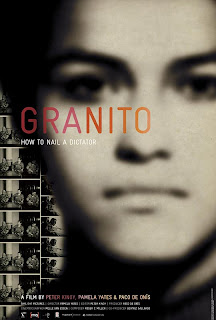 'is part political thriller and part exploration of a strange intersection of law and art. It’s a story of dark deeds, juxtaposed with the inspiring power of collective action in a quest for justice. It’s the story of intertwined destinies, and a love letter to the next generation of human rights filmmakers.'

It is, specifically, the story of how a genocide case was built against Guatemala's President, General Efraín Ríos Montt. In addition to Pamela's pivotal interview of the general, there was much hard work by IntLawGrrl Naomi Roht-Arriaza, an Advisory Council Member at the San Francisco-based Center for Justice & Accountability, as well as Almudena Bernabeu and others at CJA, a nongovernmental organization whose Executive Director is another IntLawGrrls contributor, Pamela Merchant.
Proceedings against Ríos Montt continue, as Naomi posted not long ago.
On many PBS stations Granito will air at 10 p.m. this Thursday, June 28 (check local listings here), and it will also be viewable online here this Thursday and Friday through July 28 August 20, 2012.