Times are tough.
Lots of folks are out of work.
Lives are led in endless shades of grey.
Hollywood keeps spewing out escapist fluff.
What's a socially conscious artist to do?
It's a setup familiar in our world today, and why Sullivan's Travels, in which it occurs, is a film as timely today as when it was made 71 years ago. Perhaps even more so – by the time the film appeared in late 1941/early 1942, Pearl Harbor had been attacked, and the country was moving away from the Depression on which the film focused. 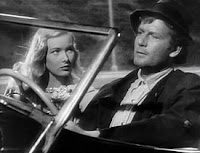 I had the opportunity to see an archival print, rich in decidedly non-HD texture, at a recent 5th birthday party for Ciné, a jewel of a nonprofit arthouse cinema here in Athens.
The story, in which actor Joel McCrea plays the film director Sullivan, who hits the tramps trail to try to answer his own question above, is fun – particularly since the tall man's short sidekick is Veronica Lake, famed for her waterfall of platinum hair. (photo credit) The overt skewering of the rich and famous will amuse 99 percent. And the film's ostensible moral – a laugh will get you a long way in a rough world – is worth mulling.

But what's most interesting is more subtle. Without comment, Sullivan's writer-director, Preston Sturges, depicted race in ways unexpected for a midcentury Hollywood release.
Color lines are clear in the homes of the wealthy, but not so in other social classes.  Hobos waiting to jump a freight train, homeless crouched in squalid camps or crowded on shelter floors are black and white, side by side. Most striking: It is the white establishment that railroads an amnesiac Sullivan to a swampy prison labor camp (depicted with all the meanness and none of the humor later seen in Cool Hand Luke), and it is the black church that restores human dignity by welcoming the chain-ganged prisoners to laugh with them as as they watch Pluto and other Disney cartoons projected on a sheet hung at the altar.
These social commentaries just below the surface, no less than the above-surface moral of the story, make the film still worth a watch.
by Diane Marie Amann at 6:00 AM