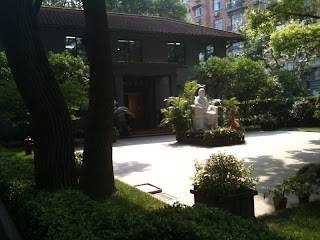 SHANGHAI – It is so easy to get lost in this city, where every subway seems to have a dozen exits, where numbers on many streets seem to follow a nonsequential drummer.
On one day that led to serendipity; to be precise, to the villa at left, once called home by a woman whose good works earned her the title of China's Honorary President.
Her name was Soong Ching Ling.
She was born in 1893 to wealthy Shanghai parents who sent her and her 2 sisters to the city's McTyeire School for Girls, then on to their teacher's alma mater, Wesleyan College in Macon, Georgia. On returning home, the 22 year old married a much older man, the Nationalist Chinese leader Sun Yat-sen. At first Soong too was active in the Nationalist movement, but after her husband died and the movement expelled Communists, she broke with its leader – Chiang Kai-shek, husband of her sister Soong Mei Ling – and moved to Moscow.
When war broke out in the late '30s, Soong Ching Ling came home and immersed herself in humanitarian work. The Chinese Defense League she founded exists to this day – known as the China Welfare Institute, it focuses on health care, education, and family and women's issues. A kindergarten and hospital are among the institutions named after her.
Holding titles of Chairman from 1968 to 1972 and President in 1981, Soong Ching Ling is the only woman to have served as head of state in the People's Republic of China.
Her support for post-World War II China is evident at this 2-story whitewashed residence, located at No. 1843 in Huai Hai Zhong Lu, on what's now a busy street in Shanghai's former French Concession. 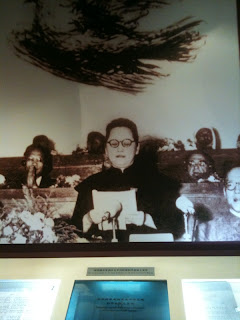 Her books, like The Struggle for New China (1952), may be found not far from the Stalin Peace Prize awarded her by the Soviet Union (right).
Also evident is her appreciation of finer things – the soft carpeting throughout the house, her collection of record albums (seems she was a Dean Martin fan), the limousines in the garage, the roses and century-old camphor trees in the garden.
For the traveler today no less than for the great woman, who died in 1981, the home is a welcome respite from the hubbub of this metropolis of 23 million.
by Diane Marie Amann at 6:00 AM