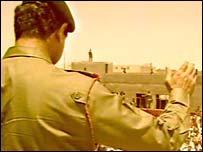 On this day in ...
... 1982 (30 years ago today), in Dujail, about 50 miles north of Baghdad, gunmen ambushed a motorcade in which rode Iraq's President, Saddam Hussein (left, gesturing to the crowd in Dujail). (photo credit) The intended target of this assassination attempt retaliated, as this Washington Post article recounted:


'Within hours, army helicopters were conducting airstrikes on Dujail and soldiers were rounding up villagers. Hundreds were imprisoned, and many of them were tortured or executed.'

More than 150 people perished in the massacre.  After Hussein was deposed and arrested decades later, the Dujail atrocity became the basis of the crimes against humanity prosecution against Hussein, which resulted in conviction and, in December 2006, in a grisly execution.