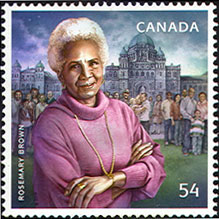 On this day in ...
... 1930, Rosemary Wedderburn was born in Kingston, Jamaica. In 1950, she moved to Montreal, Canada, where she studied at McGill University. Known after marriage as Rosemary Brown, she entered politics, and in 1972, she became "the first Black Canadian woman to be elected to a Canadian provincial legislature," as a Member of the Legislative Assembly in British Columbia. In 1975, she sought to become party leader -- the 1st black woman and only 2d woman to do so -- coming in 2d. After leaving the legislature in 1986, Brown was a women's studies professor at British Columbia's Simon Fraser University, and also was Chief Commissioner of the Ontario Human Rights Commission, among other public service. According to this site:


'A determined feminist, Ms. Brown worked throughout her life to promote equality and human rights. Her campaigns includes efforts to eliminate sexism in textbooks, increase female representation on boards and prohibit discrimination based on sex or marital status.'

Brown died from a heart attack in 2003 in Vancouver. (credit for image of 2009 Canadian stamp honoring Brown)