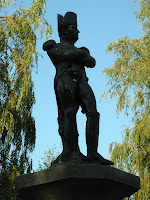 On this day in ...
... 1815, Napoleon met his Waterloo. The British defeat of the Corsica-born French emperor/general in a Belgian field ended "the Napoleonic era of European history." (credit for photo of statue of Napoleon, located in Waterloo) The era had been marked by decades of continental wars, on the one hand, and establishment of the still-influential Napoleonic Code, on the other. At 1st, Napoleon returned to Paris, but within a month he was in British custody, and before year's end he'd begun a life of exile on St. Helena, a tiny Atlantic island about 1,200 miles west of Angola. There he died on May 5, 1821, age 51.