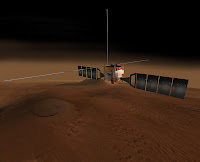 On this day in ...
... 2003, the European Space Agency launched its 1st planetary mission. Called Mars Express, it comprised an orbiting vehicle (left) and a landing vehicle, "Beagle 2 ... named after the ship in which Charles Darwin sailed when formulating his ideas about evolution." (image credit) The latter did not land; however, as detailed here,


'Orbiter has been successfully performing scientific measurements since early 2004, namely, high-resolution imaging and mineralogical mapping of the surface, radar sounding of the subsurface structure down to the permafrost, precise determination of the atmospheric circulation and composition, and study of the interaction of the atmosphere with the interplanetary medium.'

... 1953, as detailed our prior post, occurred an event today marked by a Diamond Jubilee.