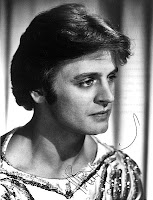 On this day in ...
... 1974, in Toronto, Kirov Ballet star Mikhail Baryshnikov defected from the Soviet Union just after his company completed its final Canadian tour performance. Then 26 years old, Baryshnikov (left) ran 3 block and jumped into a car waiting for him. (credit for circa-1970s publicity still) Despite political overtones during that Cold War era (video here), Baryshnikov told the Globe and Mail dance critic that "his decision was an artistic, not a political, choice" -- "that he wanted the freedom to dance with some of the best ballet companies in the West." As described here, this 'Grrl's all-time favorite dancer went on to do just that, and also to lead his own companies, in ballet and modern dance as well.