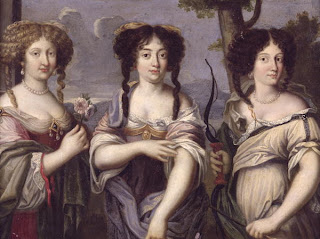 On this day in ...
... 1646, Hortense Mancini was born in Rome but grew up in Paris, 1 of 4 sisters in an aristocratic family, and a favored niece of her politically influential uncle, Cardinal Mazarin. Married at age 15, she gave birth to 4 children despite a "hellish" marriage; at age 22, she fled to her family in Rome. Mancini, the Duchess of Mazarin, was known for many affairs, with kings, princes, and countesses alike. She and a sister, Marie Mancini, who held the title Princess Colonna and also had fled her marriage, were among the 1st women in France to publish their memoirs -- and it is that achievement for which they were honored in Washington, D.C., in a just-ended Folger Library exhibit on women authors from 1500 to 1700. Hortense and Marie died in 1699 and 1715, respectively. (credit for circa-1660s portrait of Marie, at left, and Hortense, at right, with a 3d Mancini sister, Olympia, in the middle)