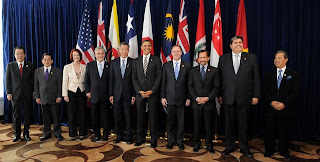 A draft of a groundbreaking trade and investment treaty under negotiation was leaked last week, revealing a text with significantly greater express affirmation of states’ discretion to regulate to address public welfare and environmental concerns than previous generations of investment treaties. If concluded, the agreement will create the Trans-Pacific Partnership, the largest free trade area in the world, linking 11 nations on four continents flanking the planet’s vastest ocean.
The leak of the investment protection chapter of the draft agreement inevitably sparked protests from anti-globalization groups. Those groups, and other critics of the investment protection regime, overstate (to varying degrees) the scope and rigidity of traditional investment treaty standards, construing them as incompatible with environmental law, human rights protection, and public welfare regulation. In reality, even without express acknowledgements such as those in the draft and recent investment treaties, traditional foreign investor protections give states ample regulatory leeway. Even so, the draft treaty takes the further step of expressly confirming that investment should be protected and encouraged with due regard to other public interest considerations. It also addresses concerns that have been raised about the transparency and openness of investor-state dispute resolution. A few examples:
► The prohibition on requiring foreign investors to meet performance requirements does not preclude a state from imposing measures to secure compliance with domestic environmental laws, to protect life or health of people or animals, or to conserve exhaustible natural resources.
► The treaty’s regulation (not prohibition) of expropriation may not be construed to prevent a state from taking measures to ensure investments conform to environmental, health, safety, and labor concerns. In addition, “[t]he Parties recognize that it is inappropriate to encourage investment by relaxing health safety or environmental measures.”
► To enhance the openness of investor-state arbitrations, extensive provision is made for amicus curiae submissions.
► To improve transparency, the treaty imposes detailed requirements on the parties and the tribunal in investment arbitrations to publicize all aspects of the proceedings, including not only awards (which already are almost universally published), but also the parties’ written submissions and hearings.

This breezy dismissal of criticisms as overstated draws on simplistic and suspect assumptions that we can trust such non-independent tribunals -- and the multinational coprorate investors who use them -- to decide on behalf of citizens what counts as "ample regulation" and where to draw the line between adequate environment, consumer, worker, public protections and reasonable investor expectations of self-serving gain . The express provisions protecting public welfare regulations appear designed to lack teeth, unlike the expansive new enforceable rights given to investors to have their expectations of freedom from regulatory control protected at the expense of human rights and democratic processes.
Does IntLawGrrls have a policy requiring bloggers to disclose their ties to interested firms or agencies? It would be helpful to know whether authors of posts are paid to advocate on behalf of clients or employers with financial and legal interests in the subject analyzed.

Thank you for your comment, Martha. I am pleased to see a fellow YLS alumna on the blog and interested in these issues. The debate is indeed too complex to fully address in a single blog post.

To respond to your question about my "ties," IntLawGrrls very kindly posted about my work a few months ago: http://www.intlawgrrls.com/2012/03/kudos-to-sadie.html. I have represented both respondent states and investors in international arbitral disputes and am now clerking for an arbitrator.

The debate does not benefit from ad hominem attacks against fellow lawyers who hold opposing views. My writing expresses my considered opinions as an international lawyer deeply involved in this area. Counterarguments are always welcome, but please let's keep the discussion civil!

Sadie, I appreciate the additional information about your work in the field -- as well as your post on this important issue. To clarify and apologize for any appearance of ad hominem attack, in calling for more disclosure I did not mean to suggest any that your arguments should be construed as less thoughtful or valid than any other. We all write from embedded perspectives (that's my feminist theory background) with "ties" to some interests and experiences more than others. I have written elsewhere advocating for more disclosure and discussion of the increasingly blurry lines between academic commentary and commentary for interested clients -- and that calling for more transparency should not be construed as ad hominem individual attacks. In the context of this particular issue, disclosure is particularly relevant in light of general concerns about lack of protections to ensure the independence of arbitrators from investor interests and other forms of bias.
In this spirit of disclosure -- I have no work ties or advocacy experience in this area at all, though my interest was sparked by communications with a US state lawmaker serving on a citizens trade group critical of the TPP investor-state provisions.