Read On! From Goods to a Good Life

(My thanks to IntLawGrrls for the opportunity to contribute this Read On! post describing my new book, From Goods to a Good Life)

From Barbie to Harry Potter, the Beatles to Beyoncé, Hollywood to Bollywood, and Viagra to life-saving AIDS medications, intellectual property now dominates our culture and rules our economy and welfare. Our children grow up in a world of copyrighted characters surrounded by trademarked goods. With the advent of the World Trade Organization and its legal obligations, intellectual property also increasingly affects people across the globe, from Brazil to Bangladesh. Yet the full cultural and economic consequences of intellectual property policies are often hidden. We focus instead on the fruits of innovation—more iPods, more bestsellers, more blockbuster drugs—without concern for what is being produced, by whom, and for whose benefit. 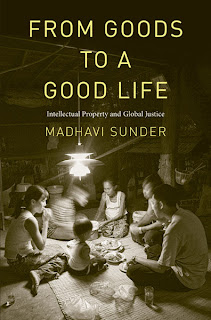 But make no mistake:
Intellectual property laws have profound effects on human capabilities, what Amartya Sen and Martha Nussbaum define as what people “are actually able to do and be.”
The most obvious example is law’s regulation of access to basic necessities, such as textbooks and essential medicines. But the connections run deeper still. Intellectual property laws affect our ability to think, learn, share, sing, dance, tell stories, joke, borrow ideas, inspire and be inspired, reply, critique, and pay homage. In short, intellectual property laws do much more than incentivize the production of more goods. They fundamentally affect the ability of people everywhere to live a good life.
Furthermore, in a global knowledge economy, intellectual property distributes wealth and power and affects global justice. Take the example of one Solomon Linda.
A black migrant worker living in a squalid Johannesburg hostel in 1939, Linda composed a song based on his own childhood experiences protecting cattle from lions in the jungle. The song borrowed the syncopation of American jazz from across the Atlantic and mixed it with an a cappella melody to create what would become Africa’s first recorded pop hit. Linda’s song soon crossed the Atlantic and was reborn, first as “Wimoweh” and later as “The Lion Sleeps Tonight.” It would go on to be recorded over 170 times, eventually finding its way into Disney’s immensely popular film and Broadway production, The Lion King. But while the song eventually produced millions of dollars for Disney and others, Linda died destitute, suffering from a curable kidney disease at the age of fifty-three. One of Linda’s children died of malnutrition and another died of AIDS.
Linda’s story illustrates how intellectual property laws have effects that extend well beyond incentives for creation. Law regulates recognition (or here, misrecognition) of the contributions of diverse people to our global culture, and distributes the material rewards of innovation. A misrecognition of Linda’s contribution led to his inability to pay for food and drugs that could have saved his and his children’s lives; conversely, recognizing Linda’s cultural contribution would have given him the agency to provide for himself and his family. Intellectual property governs the flow of free culture, allowing Solomon to remix American jazz with his own South African music, and yet also raises issues of fair culture. Solomon’s creation was left to the laws of the jungle, free to be exploited by Westerners with more knowledge and power. Finally, Linda’s song reveals the power of culture as a vehicle for mutual understanding, shared meaning, and sociability. “The Lion Sleeps Tonight” is praised as a song “the whole world knows.”
My new book, From Goods to a Good Life: Intellectual Property and Global Justice, highlights the broad social and economic dimensions of innovation and cultural exchange in a global context of sharp inequalities in power and knowledge.
I argue that law must facilitate the ability of all citizens, rich or poor, brown or white, man or woman, straight or gay, to participate in making knowledge of our world and to benefit materially from their cultural production. Democratic cultural production promotes not only economic development from market exchanges in a Knowledge Age, but also human development. Enhancing one’s capacity to participate in cultural production and critique engenders autonomy and equality, learning, critical thinking, sharing, sociability, and mutual recognition and understanding. This book is a call for intellectual property law and legal decision makers to expressly recognize and contend with the plural values at stake in cultural production and exchange.
Read the Introduction to the book and Chapter 7: An Issue of Life or Death. To buy the book, visit Amazon or Barnes and Noble. For more information about the book, please visit my website.
by Unknown at 4:30 AM