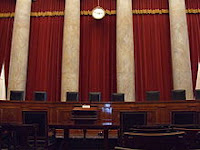 Two judgments from the U.S. Supreme Court (photo credit) this morning in cases on which we've posted:
► In Miller v. Alabama, the Court held that the Constitution's 8th Amendment prohibits sentencing a child to life in prison without possibility of parole. (Prior IntLawGrrls posts on this issue available here.)
Justice Elena Kagan wrote the opinion for the Court on behalf of 5 Justices; 3 dissents were filed on behalf of the 4 Justices who disagreed. Only one brief mention of foreign law, on page 2 of the dissent by Justice Samuel A. Alito, Jr., and then only to indicate that this was a minor aspect of the precedents on which the majority grounded its decision.
The full judgment is here.
►In Arizona v. United States (IntLawGrrls' prior posts available here), the Court held that much of that state's restrictive immigration law is invalid, having been preempted by federal immigration laws. Not set aside was a state "check your papers" requirement.
Justice Anthony M. Kennedy wrote the opinion for the Court on behalf of 5 members – Chief Justice John G. Roberts, Jr., and Justices Ruth Bader Ginsburg, Stephen Breyer, and Sonia Sotomayor. Justice Kagan, who was Solicitor General when the case began, did not take part. The 3 remaining Justices filed concurring/dissenting opinions.
The full judgment is here.
Left for another day – to be precise, till Thursday at 10 a.m. Eastern time – was issuance of the decision on the constitutionality of health care reform.
by Diane Marie Amann at 10:40 AM