It's our great pleasure today to welcome Madhavi Sunder (left) as an IntLawGrrls contributor.
Madhavi is Professor of Law at the University of California, Davis, where her research and teaching focus on domestic and international intellectual property, law & cultural studies, cyberlaw, and women's rights. She's been a Visiting Professor of Law at the Yale Law School, the University of Chicago Law School, and Cornell Law School, and was named a Carnegie Scholar in 2006. Madhavi has published articles in the Yale Law Journal, the Stanford Law Review, the California Law Review, and Law and Contemporary Problems, among others.
Today, Madhavi contributes the post below about her new book, From Goods to a Good Life: Intellectual Property and Global Justice, just published by Yale University Press.
Madhavi dedicates her post to Sita Mylavarapu (below right). In her words:


'Born in India in the 1920s, my grandmother Sita was the youngest of five sisters. Each of her elder sisters married in their teens; none was educated beyond secondary school. But Sita attended St. Mary’s College in Madras, where she was elected student body president and became a champion tennis player. She earned a master’s degree in physics from Banaras Hindu University, often called the “Harvard of India.” Sita defied one of the most entrenched of Indian cultural traditions and married for love. 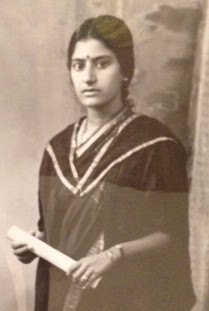