Delighted to announce that IntLawGrrls again will cosponsor the International Humanitarian Law Dialogs at a picturesque lakefront venue, the Chautauqua Institution in upstate New York. Chautauqua's near the home of another cosponsor, the Robert H. Jackson Center, named after the midtwentieth-century Supreme Court Justice who also served as Chief U.S. Prosecutor before the International Military Tribunal at Nuremberg.

The theme of this year's 6th annual Dialogs, to be held August 26 to 28, is: Hybrid International Courts: A Tenth Anniversary Retrospective on the Special Court for Sierra Leone.
Exploring this theme and recapping recent international criminal law developments will be prosecutors from international criminal fora, representatives of nongovernmental organizations, and scholars. As demonstrated in prior posts, each year a number of IntLawGrrls contributors take part.
Many present and former international prosecutors are expected to take part this year. In addition to those mentioned as specific speakers in the program detailed below, prosecutors set to attend

include the following from the:
► International Criminal Court, Prosecutor Fatou Bensouda (left), who contributed her December 2011 speech to the ICC Assembly of States Parties as an IntLawGrrls post; 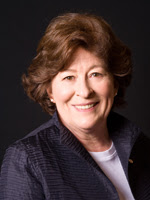 Sunday, August 26
► Showing of Granito: How to Nail a Dictator, an award-winning film on accountability in Guatemala. Earlier we posted here and here about the film, which was made by IntLawGrrls contributor Pamela Yates (left).

Monday, August 27
► Keynote speech by Hans Corell, former Under-Secretary-General for Legal Affairs and U.N. Legal Counsel, introduced by Syracuse Law Professor David M. Crane, who was the 1st Chief Prosecutor of the Special Court and is the founder of the Dialogs.
► A dialogue with the current prosecutors, moderated by Professor Michael P. Scharf of Case Western Reserve University School of Law, another cosponsor.

► 1st Annual Clara Barton Lecture by Professor David J. Scheffer of Northwestern University School of Law, formerly the U.S. Ambassador-at-Large for War Crimes. Introducing him will be Jennifer Khurana (right), Manager of the International Humanitarian Law Dissemination Unit at the American Red Cross. (Pleased to see this additional event, particularly given that Clara Barton is an IntLawGrrls foremother.)

► 2 breakout sessions on the porch of Chautauqua's lovely, circa-1881 Athanaeum Hotel: "The Challenge of Piracy" moderated by Scharf, as well as "Practitioners/Prosecutors" moderated by Andrew Beiter, head of the Summer Institute for Human Rights & Genocide Studies and the Jackson Center's Education Coordinator.
►  2d Annual Katherine B. Fite Lecture, delivered by IntLawGrrl Leila Nadya Sadat (right), Director of the Whitney R. Harris Institute at the Washington University School of Law, another Dialogs cosponsor.

Moderating will be yours truly, Diane Marie Amann (below right), University of Georgia School of Law. This sessions is sponsored by IntLawGrrls in honor of Katherine B. Fite, a U.S. State Department lawyer who helped draft the Nuremberg Charter. 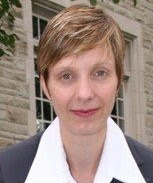 ► "Recent Developments in International Criminal Law," by IntLawGrrl Valerie Oosterveld (left), a Professor at the Faculty of Law, University of Western Ontario.

► "The Future of the International Criminal Court," a luncheon address by ICC Judge Hans-Peter Kaul, introduced by Mark Ellis, Executive Director of teh International Bar Association.
► Issuance of the 6th Chautauqua Declaration, moderated by Elizabeth Andersen (right), Executive Director of the American Society of International Law, another cosponsor of the IHL Dialogs.
For more information, contact Carol Drake at cdrake@roberthjackson.org.
by Diane Marie Amann at 6:00 AM