Here's the bottom line in Questions relating to the Obligation to Prosecute or Extradite (Belgium v. Senegal), the judgment that International Court of Justice President Peter Tomka (right) just delivered in a public, webcast session at the Peace Palace in The Hague:
► By a vote of 14-2, the court has no jurisdiction over Belgium's claims that at the relevant time period, Senegal breached customary international law. Despite this conclusion, the court made clear that today the prohibition against torture  constitutes a legal norm from which no state may derogate:


'99. In the Court’s opinion, the prohibition of torture is part of customary international law and it has become a peremptory norm (jus cogens).' 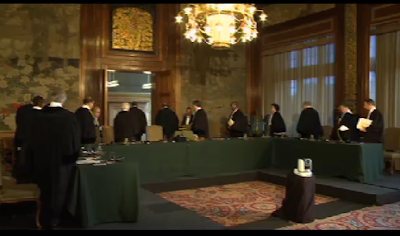 This comes in long-running litigation respecting Habré, who has been in exile in Senegal notwithstanding demands that he be held accountable on international criminal charges. It shapes up as a landmark ruling on the aut dedere principle -- that is, the principle that on proper request respecting international crimes, a state must either investigate and prosecute or, in the alternative, extradite -- at least as it is articulated in the anti-torture convention.
A shifting complement of ICJ judges joined the ad hoc judge named by Senegal in the various "no" votes above. (photos courtesy of webcast which appeared here)
In addition to the judgment now online here, there were several separate opinions, as well as a dissent by Judge Xue Hanqin of China. Notably, all 3 women judges filed separate writings.
by Diane Marie Amann at 10:23 AM