(My thanks to IntLawGrrls for the opportunity to contribute this Look On! post)

Last week, on July 5, the Tribunal Oral Federal 6 in Buenos Aires, Argentina, handed down a historic judgment convicting Jorge Rafael Videla, the former military dictator of Argentina and 10 others on trial for el robo de bebés, the systematic kidnapping of babies. The case was be the first to find that there was a ‘systematic plan’, thus qualifying it as a crime against humanity.
An estimated 500 children were robbed from their parents in Argentina. This crime has become the focus of activism in the country, led by the Madres, and now Abuelas, de la Plaza de Mayo. It was also the subject matter of La Historia Oficial (1985), directed by Luis Puenzo. Known to English-speaking audiences as The Official Story, this was the first Latin American movie to win an Oscar. 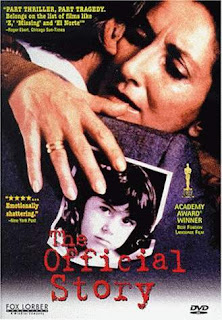 In the film, the central character, a married middle-class woman, begins a journey in which she is led to question the ‘official story’ of the military junta and to uncover the origins of her own adopted daughter.
As she seeks to discover the ‘truth’, other stories of sexual violence, silenced in the trials of the military junta in the 1980s, emerge. Her best friend Ana tells her that she was tortured and raped in a clandestine detention centre.
The rape as torture, rape as a crime against humanity, sexual violence against men and women, implicit in the film, would later be documented in truth commission reports and form part of the testimony of women in the ‘truth trials’. It would appear on screen graphically, rather than implicitly, in films such as La Noche de los Lápices (1986) (English title, Night of the Pencils) and Garage Olimpo (1999) (Olympic Garage).
Historia Oficial is definitely worth watching; you can read more about the Videla case at IntLawGrrls here, and in Spanish here.

(Cross-posted at Human Rights Film Diary blog)
by Unknown at 3:00 AM