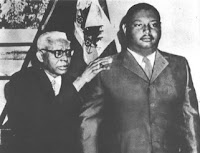 On this day in ...
... 1967 (45 years ago today), according to Spanish WikiPedia, "Ecuador broke off diplomatic relations with Haiti, on account of the grave violations of human rights perpetrated by the government of François Duvalier," aka "Papa Doc" (far left). After his election to lead Haiti in 1957, Duvalier "immediately imposed a reign of terror" (prior post), and declared himself President for Life in 1964. Upon his death in 1971, he'd be succeeded as President for Life by his son Jean-Claude, aka "Baby Doc" (near left). (photo credit) As detailed in IntLawGrrls posts available here, Duvalier fils would go into exile in 1986, only to return in 2011. Earlier this year he fended off a national trial for crimes against humanity, but he remains under house arrest (at least ostensibly; see here) pending a corruption trial.