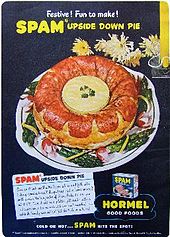 On this day in ...
... 1937 (75 years ago today), Spam made its début. (Campaign to name this National Spam Day here.) This preternaturally pink canned meat – its name is said to be shorthand for "shoulder of pork and ham," or perhaps, simply "spiced ham" – became a much-maligned staple of Depression-era diets and World War II GI rations. (photo credit) It remains popular in some corners of our world. Its iconic status is evident from the facts that its founder, the Minnesota-based Hormel Corp., has opened a Spam Museum, and that cybernauts borrowed the name to describe the annoyingly ubiquitous "e-mail offering porn, drugs and bogus investment schemes". That borrowing took company executives aback. But it also guaranteed that the name Spam would have a shelf-life as long as, well, the original product.