In January of this year, Oxford University Press published The UN Convention on the Elimination of All Forms of Discrimination Against Women: A Commentary. Co-edited by Dr. Marsha A. Freeman (right), Senior Fellow at the University of Minnesota Human Rights Center, where she is Director of International Women's Rights Action Watch, by Professor Christine Chinkin (below right) of the London School of Economics, and by Professor Beate Rudolf (below left), Director of the Berlin-based German Institute for Human Rights, the Commentary is a comprehensive 792-page tome that “describes the application of the Convention through the work of its monitoring body, the Committee.”

Indeed, collection and description are the principal aims of the Commentary, which synthesizes the Committee’s interpretation of and pronouncements about CEDAW. In this way, the Commentary is a German-style compendium in the model of Manfred Nowak’s commentaries covering the International Covenant on Civil and Political Rights (here) ICCPR and the Convention Against Torture (here).
The CEDAW Commentary is an important and useful reference book. While hefty, it would have been more so had the numerous contributors not trimmed their sails and focused on the pronouncements of the Committee and case law under the Optional Protocol. Limiting citations largely to primary sources, the Commentary does not refer to all the scholarship on CEDAW’s efficacy or the wisdom of its approaches, thought some of those approaches appear dated these three decades on. The foundational assumption of the Commentary is that CEDAW, its Optional Protocol, and the work of the Committee matter. What the Commentary may lack in critical analysis, it compensates for in the sheer breadth of its coverage of the nuts and bolts of CEDAW over more than three decades. 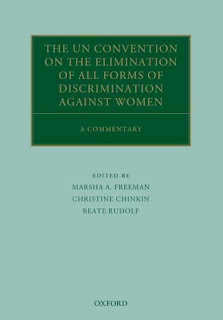 While the Commentary is conceived as an integral whole, each chapter is self-contained, written by an individual contributor. Each chapter indicates how the Committee has developed its approach to State party obligations under the given article, moving from formal equality to substantive equality and becoming increasingly specific as to persistent inequality and the requirements of full implementation. The Commentary is thus a treatise on the full meaning of gender and sex equality, reflecting the collective insight and experience of the fifteen authors rather than their individual opinions and views.
The chapters on Articles 6-16, and to a lesser extent those on Articles 1-5, follow a common outline, which makes it easy for the reader to find what she wants to know.
Worthy of particular note are the Chapters on the Optional Protocol (by Jane Connors, Chief of the Special Procedures Branch at the Office of the U.N. High Commissioner for Human Rights) and on General Recommendation 19 (by Christine Chinkin). These chapters are necessarily more robust and comprehensive, acknowledging as they must the shortcomings of CEDAW’s original iteration, which led to these subsequent additions. Indeed, OUP promotional materials label the Chapter on General Recommendation 19 “a cross-cutting chapter on Violence Against Women.” And cross-cutting it is, acknowledging the many manifestations and consequences of this phenomenon, its relationship to discrimination, and the pressure from many sectors that finally led to adoption of Recommendation 19 in 1992.
The Commentary offers an introductory chapter that situates CEDAW in the larger international human rights enterprise. It also features a complete history of the Committee's procedural development. This history indicates that the Committee frequently reexamines its procedures, in a continuing effort to improve its efficiency and its efficacy as Convention ratification approaches universal.
An unusual story lies behind the production of the Commentary.

Beate Schoepp-Schilling (left), the German human rights expert who served on the Committee for two decades—including in the leadership capacities as Rapporteur,Vice-Chair, and first Chair of the Optional Protocol Working Group—initiated the project in 2008, in partnership with Beate Rudolf. (prior IntLawGrrls post) But Schoepp-Schilling received a diagnosis of pancreatic cancer a few months later and passed away in 2009. Marsha Freeman and Christine Chinkin ultimately joined Rudolf to jointly edit the volume, which is a truly international collaboration, featuring contributors representing six continents. Fittingly, the book is dedicated to Dr. Schoepp-Schilling.
Kudos to all the contributors to this fine resource, as well as to the intrepid editors who brought this behemoth task to fruition. The Commentary will serve human rights scholars and students, gender activists, policy makers, and the wider international law community for decades to come.
by Lisa R. Pruitt at 6:00 AM