It's our great pleasure to welcome Keina Yoshida (right) as an IntLawGrrls contributor.
Keina is a candidate for a Ph.D. in law at the London School of Economics, where she earned an LL.M., with distinction, in Public International Law. She is working on her dissertation, entitled "Spectacles of justice: gender crimes in law and film," under the supervision of Professors Christine Chinkin and Linda Mulcahy.
Keina's research is funded by an award from Britain's Arts and Humanities Research Council.
She also holds an LL.B. in law and French, with First Class Honours, from Trinity College in Dublin, as well as  International Programme Diploma from Sciences Po in Paris.
As part of her research, Keina is currently an intern at the International Criminal Court,based in the Legal Advisory Section of the Office of the Prosecutor.
She's also interned at the Conseil d’Etat in Paris and at the NGO Equality Now in London.
Before beginning her Ph.D. studies, Keina was a staff attorney in the Madrid office of Womens Link Worldwide: Strategies for Gender Justice. In her initial post below, she describes how her work at that nongovernmental organization inspired her current research; in a post further below, she contributes a film review, the 1st in a series of Look On! posts to which we 'Grrls look forward.
Keina dedicates her post to Marlene Dietrich, who was born in Berlin in 1901, died in Paris in 1992, and, as previously posted, led a life that blended art and the events of her day. Keina writes: 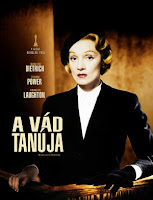 'She was one of the icons of Hollywood cinema. Dietrich starred in two trial films considered to be cinema classics: Judgment at Nuremberg (1961) and Witness for the Prosecution (1957). In her signature style of tuxedos and men’s hats, Dietrich was open about her sexuality and the relationships she had with both men and women. A vociferous critic of the Third Reich, Dietrich became a US citizen and entertained US soldiers around the world.'

Today Dietrich, shown at left in the Hungarian poster for Witness (credit), joins other inspiring women as an IntLawGrrls foremother.
Heartfelt welcome!
by Diane Marie Amann at 6:00 AM