When the Washington Post ran an article in 1939 announcing the second wedding of D.C. socialite and lawyer Grace Kanode Vickers to Col. Paul Llewellyn, it was titled, “Making Marriage Her Career.”  Luckily, the prediction was false.
Six years later, Kanode began work as an assistant prosecutor at the International Military Tribunal for the Far East in Tokyo (right).
The IMFTE was the second international war crimes tribunal. It was founded in 1946, shortly after the International Military Tribunal at Nuremberg, in the wake of the mass atrocities witnessed during the Second World War.  Over two years, the Tokyo Tribunal tried twenty-eight Japanese leaders for crimes of war.
Although the full scope of Kanode’s specific contributions to the tribunal remains unclear, she holds the distinction of being the first woman prosecutor to appear before an international military tribunal.
When I first learned of Kanode’s work as the first woman prosecutor at Tokyo via a footnote that referenced her, I became intrigued by her story. What, I wondered, convinced a young lawyer to relocate to postwar occupied Japan in 1946 to try war criminals? Out of curiosity to know more about her undocumented accomplishments, and with a penchant for historical research, I began to research her life and career.
Although this research may raise more questions than it answers, my posting today shares what I have learned thus far about Kanode’s career, mostly from archives not available online. I do so in the hope that more discoveries are soon to follow. 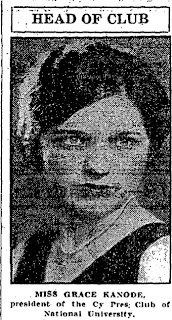 Early career in law
A 1931 graduate of the National University Law School (now George Washington University Law School), Kanode distinguished herself through leadership positions while a student. During her time there, she was elected president of the Cy Pres Club, the oldest and largest women’s club in the university.  After graduating, she served as law clerk to Chief Justice Alfred Adams Wheat of the U.S. District Court in D.C., and later worked with the law firm of former Secretary of State Robert Lansing.
She was also sartorially inclined, according to news media.  A 1934 Washington Post article on women attorneys and fashion described Kanode as an “aide to Chief Justice Wheat,” who “has sparkle and dash and wears clothes as they should be worn.”
As a representative of the Women’s Bar Association, Kanode attended the International Congress of Comparative Law in The Hague the summer of 1936. Upon returning, she remarked:


'[I]t was gratifying to note the courtesy and esteem for women in the profession among the men in Paris and London with respect to the use of association libraries and membership.'

She also served as a delegate on behalf of women lawyers at the International Law Conference in Santiago, Chile.  Soon thereafter, in December 1945, she relocated to Japan for eight months to serve as part of the prosecution team in Tokyo.

Time in Tokyo
Although no commentary has been published regarding Kanode’s specific duties, the IMFTE transcripts reveal that she was an active member of the prosecution team during her eight months in Tokyo, from December 1945 through September 1946. She served on the prosecution team headed by Joseph B. Keenan, and conducted legal research regarding the military and economic aggression of the Japanese in the Far East, focusing in particular on Inner and Outer Mongolia and Manchuria.
Tribunal transcripts document five occasions upon which Kanode addressed the tribunal. Each occasion demonstrates her significant role in introduction and defense of evidence documenting Japanese aggression in the region.
Upon her return to the United States, Kanode fondly recalled the welcome she had received from Australian Judge William Webb, the IMTFE President, who greeted her before the tribunal on July 1, 1946:


'We welcome you cordially. You probably are the first woman to appear before an International Military Tribunal.'

As Kanode’s papers are unavailable, we know very little about her specific experiences at the tribunal aside from what the transcripts disclose.  She explained to a reporter that the Japanese “couldn’t get over a woman being sent there to help prosecute war criminals.” During one interview, Kanode quoted a Japanese-language newspaper article describing the role of women at the tribunal. It read:


'In one room on the third floor of the former War Ministry there is the only female prosecutor with gentle delicate features, which we least expected from a woman of such a profession. Woman as she is, her duty is by no means light.  With a necklace of big gems peeping out from the neckline of her black dress, she carried herself so stylishly as to make her sky-blue pupils speak as fluently as her mouth.'

If the Japanese were surprised by her presence at the tribunal, at a minimum they were complimentary of both her style and her eloquence.

Back home in D.C.
Kanode returned to Washington and was received by the press as a “local Portia,” a reference, of course, to the legally skilled character in Shakespeare’s Merchant of Venice. Upon resettling in D.C., Kanode returned to private practice, and was considered (though passed over) for a judgeship. In 1950 she married for a third time, to Henry Nelson Bliss.
An article published in the Women’s Law Journal 1951-52 discussed her distinguished career.  According to that profile, at some point after her return, she published an article entitled “America and the Future Subversiveness,” which was distributed to members of the House and Senate. She was also at work on her personal narrative entitled “Assignment K – Tokyo,” though it is unclear if she completed this memoir prior to her death in 1956. I have not yet discovered these manuscripts; surely they would offer great insight into Kanode’s experiences as a prosecutor at one of the first international military tribunals.
In tomorrow’s posting, I’ll consider the importance of Kanode’s role as the first woman prosecutor in the context of others who forged early careers in international criminal law at Nuremberg.
by Shana Tabak at 6:30 AM