(My thanks to IntLawGrrls for the opportunity to contribute this introductory post, which builds on my research)

When the colony of Australia was first settled, it received the English law common law, which became the Australian common law. This law included the 18th century proposition that a ‘marital rape immunity’ prevented a man from being convicted of the rape of his wife, because she was presumed to have given general consent to sexual intercourse with him upon marriage. This proposition of ‘marital rape immunity’ may be traced to Sir Matthew Hale's The History of the Pleas of the Crown.
Hale's proposition was relatively uncontroversial throughout the Commonwealth for several centuries, although several English judges did express some reservations about it over the years; for instance, in R v Clarence (1889) 22 QBD 23. 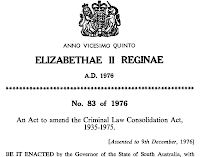 In 1976,  by means of the Criminal Law Consolidation Act Amendment Act 1976, South Australia became the first jurisdiction in the common law world to abolish the presumption that a wife gave such consent. This statutory amendment enabled the conviction of men for the rape of their wives, although, until 1992, the rape had to be accompanied by threats or violence for the offence to be prosecuted.
In 1991, in its judgment in R v L, the High Court of Australia made a declaration that the ‘marital rape immunity’ was no longer part of the common law of Australia. The combined judicial and Parliamentary decisions seemed to have resolved the law of rape in marriage in Australia, and, indeed, the matter was not raised in court for two decades.
However, in 2010, the state of South Australia sought to prosecute ‘Mr P’ for two rapes of his then wife in 1963 (R v P, GA (2010) 109 SASR 1).
Mr P’s case is controversial because the alleged rapes occurred before the immunity was abolished by either the South Australian Parliament or the High Court:
► If the abolition of the marital rape immunity had only prospective effect, it stopped being available to a defendant from the time it was formally abolished. In this situation the abolition of the immunity would not apply to Mr P, and he might have a defence to the rape charges.
► However, if the abolition also applies to actions that occurred before the changes in the law, then he faces conviction for rape. This latter possibility raises the principle against retrospective application of criminal laws, which holds that conduct should be judged by the law in place at the time it occurs, rather than years later by laws that have changed with social attitudes.
Mr P argued before the Supreme Court of South Australia that prosecuting him for his actions in 1963 breached the fundamental human right, expressed in the Convention for the Protection of Human Rights and Fundamental Freedoms, that no one should be found guilty of a crime for action that was legal when it occurred.
The prosecution argued that Mr P raped his wife and should not “escape the consequences because of outdated, outmoded and long-rejected views about the subservience of married women”. It argued that, at least, the 1991 declaration by the High Court, and possibly the statutory abolition by the South Australian Parliament, had retrospective effect, so that the immunity had no application in 1963.
The South Australian Supreme Court was persuaded by the prosecution.

The majority held that if the charges of rape were proved, Mr P could be convicted, as the 1991 abolition did not have only prospective effect, but rather it applied to all situations as though the immunity had never existed. The judges found that the principle against retrospectivity was not a rule of law, and that they could not uphold an immunity that was a “blot on the history” of the common law.
Mr P appealed the decision to the High Court of Australia.
His argument remained as it had been in the lower court. However, there was something of a shifting of the goalposts by the prosecution in the move to the High Court. It refocused its argument away from the retrospective application of the abolition of the immunity, toward the argument that either the immunity never existed, or if it once did exist, it had ceased to exist some time before 1963, and so retrospectivity was not an issue.
Two of the High Court judges rejected that prosecution argument in the strongest of terms, and upheld the principle against retrospective application of criminal laws and the appeal.

However, the majority of the High Court in the May 2012 judgment in PGA v The Queen accepted the prosecution argument, dismissed the appeal, and upheld the decision of the Supreme Court of South Australia that Mr P could be tried and convicted of rape. The majority openly sidestepped the retrospectivity issues, and found that if the marital rape immunity ever had existed, it did not survive the enactment of the statutory provision of rape in 1935. Specifically, it found that while no judicial decision in either England or Australia had either abolished the immunity or declared that it never existed, by 1935


'in Australia local statute law had removed any basis for continued acceptance of Hale’s proposition'.

There is clear tension in this case between the conflicting priorities of bringing rapists to justice and of not unfairly applying contemporary law to historical events. Advocates for women and victims of crime have applauded the High Court decision, but other legal commentators are critical of the apparent return to the declaratory theory of the common law and the perceived retrospective application of criminal law.
There is as yet no indication of whether the prosecution will proceed. It seems unlikely that the matter will go to trial without, first, a defence application for a stay of proceedings on the basis that an 82-year-old man is facing trial over events which occurred almost 50 years ago, where, in addition to the usual forensic disadvantage that results from such a delay, he has been deprived of a defence.
by Unknown at 4:30 AM