Attorney Grace Kanode Llewellyn (below left) worked as a prosecutor at the International Military Tribunal for the Far East in Tokyo (right), and holds the distinction of being the first woman to appear before an international criminal tribunal.
In my posting yesterday, I introduced Kanode to IntLawGrrls readers, and described what I have discovered thus far of her legal career. As I mentioned, when Judge William Webb of Australia, President of the IMTFE, greeted Grace Kanode Llewellyn before the tribunal on July 1, 1946, he stated,


'We welcome you cordially. You probably are the first woman to appear before an International Military Tribunal.'

Kanode, however, was not the only woman to appear before a war crimes tribunal during that nascent era of international criminal law.  Half a world away at Nuremberg, prosecutors were simultaneously prosecuting the worst criminals of Nazi Germany.
As we know from scholars such as Diane Marie Amann, Diane Orentlicher, and John Q. Barrett, who have brought to light the contributions of women at postwar trials in Nuremberg, one woman played a key role in drafting the London Charter that set up the International Military Tribunal, and in the later Nuremberg proceedings quite a few women distinguished themselves as prosecutors.
Yet Judge Webb’s kind welcome to Kanode is corroborated by records indicating that no woman appeared during the first “Trial of the Major War Criminals” at Nuremberg. This trial lasted from November 14, 1945, to October 1, 1946, and thus Kanode’s appearance at Tokyo, in July 1946, was likely the first by a woman.
Kanode was not the only woman at Tokyo:

► The prosecution team also included, as depicted above, U.S. lawyers Eleanor Jackson, Virginia Bowman, Bettie Renner (about whom, this tragic article), and Lucille Brunner.
► Eleanor Bontecou worked for the War Department and helped prepare for the prosecution of major war criminals in the Pacific theater. (prior IntLawGrrls post)
► A Dutch woman was also listed as assistant prosecution counsel: Mrs. C.R. Strooker.
► American Helen Grigware Lambert gave the final summation against the defendant Naoki Hoshino, a highly influential government official of Manchukuo who served as the Vice Minister of Financial Affairs during the war.
Kanode’s obituary indicated that she was


'believed to be the first woman ever to figure in the proceedings of a military tribunal.'

Though she was the first, she was among illustrious company globally. 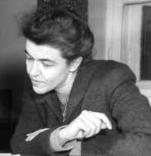 Playing important roles at Nuremberg were Cecelia Goetz (bottom right), the only woman to give an opening statement at Nuremberg, and Katherine B. Fite (right), who worked closely with Supreme Court Justice Robert H. Jackson, Chief U.S. Prosecutor, to build the U.S. case in the first trial. IntLawGrrls' Women at Nuremberg series has profiled them and a number of their colleagues. 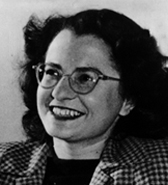 Concluding thoughts
In today’s small universe of international criminal tribunals, many lawyers working at international criminal tribunals, scattered from The Hague to Phnom Penh to Arusha, have likely crossed paths with one another. It’s intriguing to ponder whether the female attorneys working in the first international criminal tribunals, in Nuremberg and Tokyo, might have known of each other’s existence as trailblazers in the field.
Upon their return to the United States, did they gather for drinks to compare stories of their international justice pursuits? During an era in which women lawyers were few, it is difficult to assess the impact that women such as Kanode had on the tribunal itself.
The prosecution team, under the leadership of Keenan and General Douglas MacArthur, was certainly dominated by men within the context of the postwar military occupation of Japan. Although women prosecutors took on substantive work, might the tribunal have differed had more women occupied greater positions of power there?
Despite widespread evidence of sexual violence during World War II, rape was never prosecuted as a war crime in any of the trials at Nuremberg, as addressed by Kelly Dawn Askin’s scholarship on war crimes against women.
Yet at the IMTFE, while rape was not prosecuted separately, it was included in the list of crimes charged in the Tokyo indictments, and it was regularly included in the IMTFE trial testimony and transcript.
Though it may be impossible to answer, one cannot help but wonder whether the contributions of Kanode and the other female prosecutors at Tokyo might have had any relationship to the inclusion of rape charges within indictments at the IMTFE.
Until their unpublished memoirs or personal papers are discovered and examined, we may never know how women such as Kanode fared professionally within the tribunal, or how these women perceived their experiences at the vanguard of international criminal law.
by Shana Tabak at 6:30 AM