Newcomer to prosecutors' walk of fame 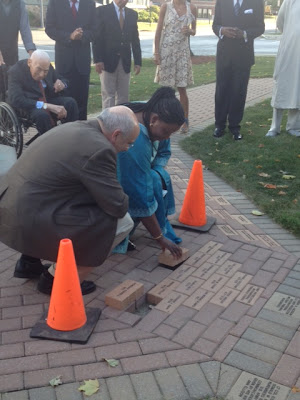 JAMESTOWN, New York –  The name of Fatou Bensouda is now part of a prosecutors' walk of fame.
As depicted in the photo above, Bensouda, who was sworn in as chief Prosecutor of the International Criminal Court this past June, yesterday placed a brick bearing her name in the pathway leading to the steps of the Robert H. Jackson Center here.
Thus opened the 6th annual International Humanitarian Law Dialogs, which runs through tomorrow and live webcasts of which are available here.
A brick also was placed in the name of another prosecutor whose mandate began earlier this year, Norman Farrell of the Special Tribunal for Lebanon; as Farrell could not attend, IHL Dialogs organizer David Crane did the honor.
Bensouda and Farrell thus joined a host of esteemed prosecutors, including officers of all the post-Cold War tribunals, as well as some persons who prosecuted at Nuremberg.Two of them also are depicted above: next to Bensouda is James Johnson, formerly the Deputy Prosecutor at the Sierra Leone court and now the head of the Jackson Center; behind her is H.W. William Caming, lead prosecutor in the Ministries Case litigated in the subsequent Nuremberg trials.
The location for this walk of fame is apt, for Jackson, as blogreaders well know, took leave from the U.S. Supreme Court in 1945 to serve for a year as Chief U.S. Prosecutor before the International Military Tribunal at Nuremberg.
Following the ceremony, attendees were treated to a discussion of the Charles Taylor case, conducted by the four persons who led the investigation and prosecution of that case when they were, in turn, Prosecutor of the Sierra Leone court: Crane, Sir Desmond de Silva, Stephen Rapp, and Brenda Hollis. Keep watch at the Jackson Center website for the video of this event; it was fascinating, and will make a great teaching tool.
by Diane Marie Amann at 1:47 PM