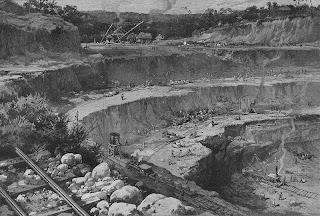 On this day in ...
... 1902 (110 years ago today), the United States purchased from France the rights to the Panama Canal -- that is, the Central American land on which the French for decades had tried in vain to build a canal interocéanique that would link the Atlantic and the Pacific. (credit for 1885 illustration of French-led excavation) Congress had authorized the purchase a month earlier, by its passage of the Spooner Act of 1902. (Prior posts on the subsequent completion of the canal and its much-later return to Panama are, respectively, here and here.)