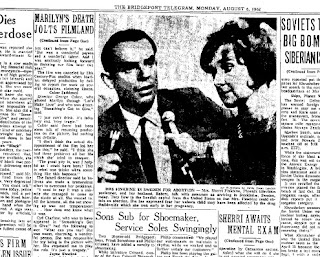 ... 1962 (50 years ago today), the BBC reported: "Abortion mother returns home." Thus began a story about "Miss Sherri," the host of the Phoenix edition of the then-popular children's TV show, Romper Room. She was Sherri Chessen Finkbine, 30, who "decided to terminate her fifth pregnancy after discovering that tranquilizers she had taken in the first few weeks of her pregnancy contained the drug Thalidomide," a demonstrated cause of birth defects. Finkbine's decision, The New York Times recalled in a 1992 article, "sparked such intense public condemnation that the Federal Bureau of Investigation stationed agents at her home." The highest court ruled against her in her home state of Arizona, where the law forbade abortion for any reason other than saving the mother's life. (It would be another decade before criminal abortion statutes were outlawed by the U.S. Supreme Court in Roe v. Wade (1973).) She and her husband, a high school teacher, thus flew to Sweden, where, after mental health testing, she obtained a legal abortion (the fetus was determined to have just one arm and no legs). (credit for image from Connecticut newspaper depicting the couple in Sweden, amid news of Soviet bomb tests and Marilyn Monroe's death) They began their return trip on this day a half-century ago. Subsequently, according to the BBC, the couple's other 4 children were harassed, and both of them were removed from their jobs. After having another 2 children, they eventually divorced.