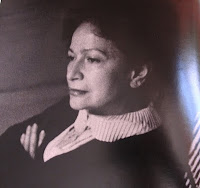 On this day in ...
... 1910, Hedwig Lindenberg was born in Bucharest, Romania. After graduating from high school she studied art in Vienna, returned briefly to study philosophy and art history in Bucharest, and eventually resumed art training on her own, traveling to Paris and. Married in the early 1930s and there after known as Hedda Sterne (right), she fled to New York during World War II.

(photo credit) There she married again, to New Yorker cartoonist Saul Steinberg. She was only woman in a group of abstract expressionists known as "The Irascible 18"; other members included Jackson Pollock, Willem de Kooning, and Mark Rothko. Though relatively unknown, her work has been displayed at major U.S. museums. (credit for 1950 painting at left) Sterne died in Manhattan in 2011, about 6 months after her 100th birthday.