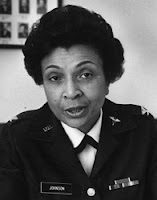 On this day in ...
... 2011, Dr. Hazel Johnson-Brown (left) died at age 83 in Wilmington, Delaware. She'd been born 83 years earlier in a Pennsylvania farming community, into a family with 7 children. Her early efforts to become a nurse were thwarted, but eventually she was admitted to New York's Harlem Hospital School of Nursing, from which she was graduated in 1950. That was 2 years after President Harry S. Truman desegregated the Army, and soon she joined that branch of the armed forces, eventually making history: in 1979, a year after she earned a Ph.D. in education, she was appointed to lead the 7,000-strong Army nurse corps and simultaneously promoted in rank, so that she become the 1st African-American woman named an Army general. (credit for 1979 photo courtesy of the Washington Post)