Pravda and the anti-Putin Riot 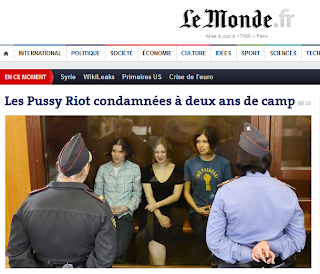 The "hooliganism" conviction of 3 members of the punk band Pussy Riot drew a thought-provoking variety of responses yesterday.
The New York Times and Paris' Le Monde made it the lead story on their websites, as the screen-grabs at top and bottom demonstrate.
But it was a different story on the website of Pravda, the Russian daily based in Moscow, where the convictions were handed down.
In fact, there was no story at all. At least not on the front page. 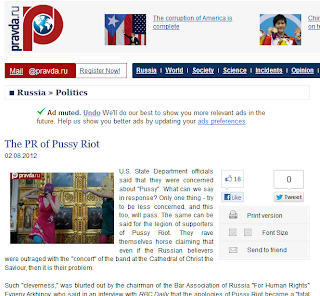 One had to click about the site to find "The PR of Pussy Riot." (It's just below a link to a story titled "The corruption of America is complete.")
Published more than 2 weeks ago, Pravda's "Riot" editorial blasted the U.S. Department of State for expressing concern about the trial of the 3 women on a charge that stems, as we've posted, from their mounting of an anti-Putin protest from the pulpit. (Meanwhile, yesterday the BBC quoted State's Victoria Nuland, who said "the US was 'concerned about both the verdict and the disproportionate sentences" – 2 years – "and the negative impact on freedom of expression in Russia.'")
The editorial also drew a comparison – as best it could – between these band members' plight and that of the Sex Pistols back in the days, 35 years ago, of "God Save the Queen." 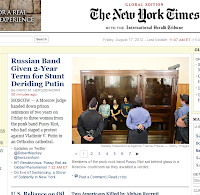 The contrast in new coverage served to remind that local news outlets sometimes see an event quite differently from the way it's presented in media far from the events (though closer to our home). It's a phenomenon that yours truly noted when in China during this summer of global tension in the South China Sea, for instance. The prevalence of that phenomenon makes one thing clear:
To comprehend the many facets of a global news story, it's best to examine it from more than perspective.
by Diane Marie Amann at 6:00 AM