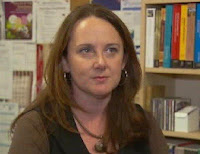 It's our great pleasure to welcome Kellie Toole (left) as an IntLawGrrls contributor.
An Associate Lecturer at the University of Adelaide in South Australia, Kellie teaches criminal law and procedure, as well as the law of evidence.
She is admitted as a practitioner of the Supreme Court of South Australia and the High Court of Australia. She practiced criminal law defence law with disadvantaged clients through Australia's legal aid system before joining the faculty at Adelaide Law in 2011. She has a special interest in the death penalty; in 2006, she was an intern at GRACE, the Gulf Region Advocacy Center in Houston, Texas, where she assisted with the representation of poor Americans facing capital punishment.
Kellie's research interests lie at the intersection of human rights law and criminal law. She has written on the topics of marital rape and defenses to homicide, with particular regard to women who kill abusive partners. In her introductory post below, Kellie draws upon this research to discuss a current Australian case that prompted judges to consider the reach of the abolition of marital rape immunity.
Kellie dedicates her post to Dame Roma Mitchell (1913-2000), a former Justice of the South Australian Supreme Court. Kellie writes:


'Dame Roma Mitchell was a prominent South Australian legal professional. Among numerous pioneering achievements, she was the first woman to be appointed Queen’s Counsel in Australia, the first female Justice of the Supreme Court of any Australian state, the founding Chair of the Australian Human Rights Commission, the first woman Governor of an Australian state, and the first female chancellor of an Australian university.
'Roma was raised by a single mother, as her father was killed in World War I when she was 4 years old. The struggle to raise her daughters on a war widow’s pension motivated Roma’s mother to her ensure her daughters received a quality education. These early experiences showed Roma the power of education and provided the foundation for a life-long passion for social justice issues. This passion was fuelled by the poverty she saw as a University student during the Great Depression, and the disadvantage she witnessed through her work as a matrimonial lawyer.
'She led campaigns to allow women to serve as jurors, for equal pay for women, and for flexibility to allow female lawyers to return to the profession after having children. In the 1970s, she convened the Criminal Law and Penal Methods Reform Committee of South Australia, which recommended progressive changes to the law regarding the death penalty, sentencing and prison reform, and Aboriginal welfare. On a personal level she was much loved for her sense of humour, warm and down-to-earth manner, genuine interest in people, and sociability and quick wit.'