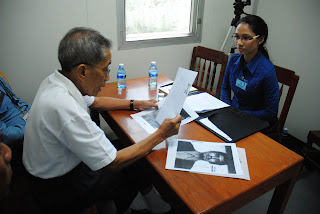 On the morning of August 29, 2012, I had the opportunity to meet and interview Duch, infamously known as the head of former Khmer Rouge secret prison S-21. The interview took approximately two hours. This was my first meeting with a high-ranking leader of the Khmer Rouge. I had never imagined that I would one day sit before him and ask him to provide me with facts about his victims.
The purpose of the interview was to ask Duch to help me to understand two mysterious photographs of S-21 Western prisoners.
While preparing my list of questions for him, I had many expectations.
At first I hoped that he would provide me with long narrative answers, just like he did to the questions posed to him at his trial before the Extraordinary Chambers in Courts of Cambodia in 2009.
I also hoped that he would remember the faces of his victims, given that, during his 2009 testimony, he had appeared to possess an excellent memory. I expected that he might express some sort of remorse or ask for forgiveness respecting the whose photos I was going to show to him.
Finally, I hoped that he would indicate his sincerity through his verbal and bodily expressions.
At the end of the day, I had quite high expectations of Duch.
That morning, my DC-Cam colleague, Kok-Thay Eng, and I prepared for this important meeting. Kok-Thay had brought a professional camera and video to capture images of Duch. (Two of his photographs accompany this post.) Interviewing Duch was such a unique opportunity that we wanted everything recorded. Kok-Thay loves photographs. So did Duch! I learned later that Duch loved photography and drawing, although he did not have much time for such hobbies. Duch told me he owned a camera and a tripod with which he used to take photographs of himself, his family, and his colleagues. It surprised me that his favorite activities were the same as those of ordinary people. 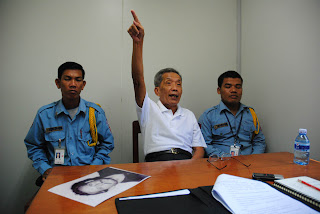 The first thing Duch told me was that he was trying to locate a family photo of his dead wife and daughter. He first saw it published in a Thai newspaper in 1980s, while he was living in a camp at the Thai border, and had been trying to locate it ever since. Among others, he had asked Rithy Panh, the Cambodian-French film producer, to find this photo. Now he asked me and DC-Cam to help him locate the photographs. He told me that wanted the photo to make his memories with his wife come to life.
I was touched. I was also surprised that an executioner responsible for at least 14,000 victims at S-21 wanted to keep a memory of his family. It made me realize that he is nonetheless a human being, and can still express love, regret, compassion, or remorse.


Arriving at the ECCC, Kok-Thay and I underwent a security check before we were directed to a room the size of small cabin, painted white inside and out. The room next door, of similar size and color, was the office of the detention facility's head. Just before we stepped into the room, which contained nothing but a table, a few chairs, and an air-conditioning unit, Duch appeared from nowhere with two guards at his sides, and we all walked into the room.
Duch waited in his seat while my colleague and I prepared our equipment. The room was actually a little larger than it looked, just enough space for several people and our camera equipment.
I sat down, introduced myself, explained why I wanted to meet him, and discussed how I was going to conduct the interview.
Kok-Thay then took the opportunity to introduce himself. He said he was from Chi Kreng district of Siem Reap province and born into a Cambodian-Chinese family. The introduction, in some respect, was intended to draw Duch's attention to their common background, as both had come from Chinese families. Kok-Thay added that he used to visit Duch's home in Kampong Thom. Not surprisingly, Duch reacted,


'What were you doing at my home?'

Kok-Thay explained he had visited to get to know his family better, and that it was simply easy for him to drop by the village.
It was interesting to see the strong reaction on Duch’s face.
I thought he might have forgotten how much people knew about him, about his family, and about his role at S-21, either through the 2006 book The Lost Executioner or through the 2009 trial. To me, this was not a surprise, given that anyone would be concerned about his parents and family. Duch is, after all, a human being. In nature, all humans have the qualities of compassion, kindness, and benevolence. Even though he was a criminal convicted for crimes against humanity, I wanted to see him from a humanitarian perspective. I also wanted to see his human side come out during the interview.
I next showed Duch several photographs in the hopes that he would provide us with useful information.
First, I took out the mysterious photographs of two Western victims. I asked if he could identify or remember the persons in the photos. After briefly inspecting the photos, he exclaimed,


'There were only four Westerners who came in S-21 prison, but their photos were destroyed according to Nuon Chea's order.'

Duch managed to keep a photograph of one prisoner, which he described as "the photo of prisoner with shackles on their legs." He then added,


'For these photographs, I never saw them. At S-21, the prisoners were ordered to wear clothes and tags.'

He meant these photographs did not show the prisoners with tags or prisoners' clothes, so they were not from S-21. He denied seeing the photos before and only acknowledged four Western prisoners at S-21, whose documents had all been burned. According to the DC-Cam's S-21 list of prisoners, there were at least 11 Western prisoners who were imprisoned and killed at S-21. 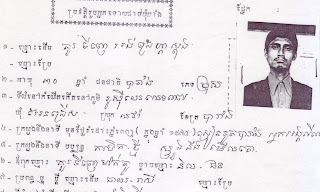 Duch expressed no memories of several other S-21 victims whose photos I showed to him. Other photographs and documents of S-21 victims, including those of French national Andre Gaston Courtigne (right), British national John Dewhirst, and Cambodian prisoner Chuon Heng – he said he had no memories of these people, not even one of them. Without additional documents besides the photographs, I assumed he would not have even accepted they were the victims of S-21. In any case, he neither remembered the faces of these people nor acknowledged that these people were imprisoned and killed at S-21.
Since Duch did not offer any new information about the photographs, I changed my line of questioning. I asked if he wanted to say anything to the victims' families. He just said,


'I have already expressed my apology in my statement at the trial, which I believe has been publicly published.'

I was expecting him to either repeat that apology or to ask for forgiveness from individual families. To me, Duch’s unwillingness to express remorse reminded me of his role as the head of S-21. This undermined my belief in his statement at the trials.
Throughout the conversation, he said he held close the memories of his family. I wondered if he had ever cherished other people's memories – especially those of his victims – as he did his own. In my opinion, Duch's expression of remorse at trial lacked sincerity.
In our last moments, I tried to get Duch to talk about his motivation for helping to identify the photos. What he responded was rather disappointing:


'I am a politician. I take responsibility for what I did. If I did wrong, I acknowledged my action. Therefore, to be sure how wrong I am, truth should be revealed.'

He mentioned nothing about the victims. Whether this revelation of the truth is important to victims or not does not matter to him. He burst into laughter after finishing this sentence. His laugh sounded weird to me, and he made me feel uncomfortable continuing to ask further questions.
When I asked if he wished to be forgiven by victims and Cambodian people, he said:


'It was a different story.'

This was unexpected and rather disappointing. Being a human, after all this time had passed since his commission of cruel crimes at S-21, Duch appeared reluctant to express remorse to the families of victims in the photographs. He failed to meet my expectations of him, and undermined my willingness to accept the human side of a perpetrator like him.
by Unknown at 4:30 AM