Kiobel: A Preview of the Arguments 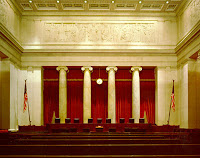 This Monday, October 1, the U.S. Supreme Court will hear reargument in Kiobel v. Royal Dutch Petroleum, on the extraterritorial reach of the Alien Tort Statute. (Prior ATS posts)
Based on the merits and amicus briefs, four issues will likely consume the oral argument; specifically, the:
►  Impact of the Court's 2004 judgement in Sosa v. Alvarez Machain;
►  Presumption against extraterritoriality;
►  Status of universal civil jurisdiction under international law; and
►  Adequacy of existing abstention doctrines.

The Case for Shell
In its supplemental brief, Shell seeks a categorical bar on extraterritorial ATS litigation, one that would foreclose not only actions against corporate defendants, but also actions against individual human rights abusers.
Shell’s case rests on a core assertion that extraterritorial ATS litigation violates foreign sovereignty and international law. The argument relies on two canons of statutory construction:
► First, invoking the presumption against extraterritoriality, Shell argues that courts must not recognize ATS actions for foreign human rights abuses because the ATS does not explicitly say that it applies extraterritorially. Citing to the Court's decision in Morrison v. Australia National Bank (2010) (prior post), Shell contends that this presumption limits a court’s power to recognize a federal common law cause of action, even if the substantive norms derive from international law.
► Second, invoking the Charming Betsy canon – that an ambiguous statute should be construed not to violate international law – Shell argues that the ATS violates international law because it lacks a basis for prescriptive jurisdiction.
Notably, Shell contends that the ATS is not a valid exercise of universal jurisdiction, for the reason that states have only consented to universal criminal jurisdiction, not universal civil jurisdiction. In Shell’s view, universal civil jurisdiction is a greater invasion of sovereignty, since private litigation is not checked by prosecutorial discretion. Harvard Law Professor Jack Goldsmith’s amicus brief for Chevron forcefully argues this point:


'Under international law, a nation’s sovereignty over activities within its territory is presumptively absolute, subject to exceptions by national consent. Nations […] have not, however, consented to allow a foreign court to entertain civil causes of action on the basis of universal jurisdiction, as is done in ATS cases.'

The Case for the Kiobel Plaintiffs
In their supplemental brief, the Kiobel plaintiffs argue that Sosa already answered the question of extraterritoriality. Sosa presumed that the ATS applies to abuses overseas: it embraced Filártiga v. Peña-Irala (2d Cir. 1980), and crafted a framework to address concerns of international comity. Shell’s categorical bar nullifies this framework.
Moreover, plaintiffs argue, the presumption against extraterritoriality does not apply to jurisdictional statutes such as the ATS. Even if it did, the statute’s text and history overcome the presumption. As the legal historians brief shows, when Congress enacted the ATS, it clearly intended the law to enforce international norms like piracy, which extended beyond U.S. borders. Indeed, Attorney General Bradford’s 1795 opinion – applying the ATS to actions in Sierra Leone – confirms that the framers understood the ATS to have extraterritorial effect.
The plaintiffs also argue that the ATS’s global reach is fully consistent with international law, as follows:
► First, the ATS exercises “adjudicative jurisdiction” rather than “prescriptive jurisdiction” – the ATS does not legislate regulations and project them overseas; it simply provides a forum to adjudicate international law claims.
► Further, under the S.S. Lotus Case (Permanent Court of Justice 1927) (prior posts), one state’s exercise of jurisdiction is presumed valid, unless it violates a specific prohibitory rule. Shell fails to prove that international law prohibits providing a civil remedy for foreign human rights abuses. To the contrary, international law authorizes universal jurisdiction and obligates states to provide effective remedy.


'Retributive and compensatory justice go hand in hand. If international law allowed States to exercise universal criminal jurisdiction over gross violations, while prohibiting them from offering victims compensation for the same violations, this would cut off the second leg of the principle of effective remedy, which universal jurisdiction is meant to protect.'

The U.S. Government Walks the Line
Though it argued for the plaintiffs in Kiobel I, the U.S. government filed an amicus brief on behalf of neither party in Kiobel II.


'challenges the actions of a foreign sovereign in its own territory.'

The Wild Card: Existing Abstention Doctrines
As the countless briefs demonstrate, ATS litigation raises complex issues at the intersection of federal jurisdiction and international law.
Yet the existing Sosa framework, with its backdrop of abstention, may already offer the simplest solution. As the plaintiffs and several amici (including the Center for Justice & Accountability, for which I serve as Executive Director) note, plenty of existing doctrines – such as forum non conveniens, personal jurisdiction, sovereign immunity, and international comity – address concerns raised by extraterritorial litigation, while still preserving the ATS as a civil remedy for human rights violations.
For CJA and our clients, we urge the Court to preserve this tool for denying safe haven to those who perpetrate abuses such as torture, genocide, and crimes against humanity, wherever they occur.