Look On! Notorious take on post-WWII

Recently I went to the BFI Southbank, the British Film Institute cinema in London, to see Notorious (1946) by Alfred Hitchcock.
Throughout this month, the British Film Institute is celebrating the 'Genius of Hitchcock', a festival showcasing some of the work by this master of suspense, who was born in London in 1899 and died in California in 1980.
For those unfamiliar with Hitchcock, his most famous movies include Psycho (1960), The Birds (1963), Marnie (1964), Rear Window (1954), and Vertigo (1958). He made many other amazing films, mixing suspense and humour, such as Strangers on a Train (1951) (remade by Danny DeVito as Throw Mamma from the Train (1987)), The Trouble with Harry (1955) and Rope (1948). (Prior IntLawGrrls posts on Hitchcock here and here.) 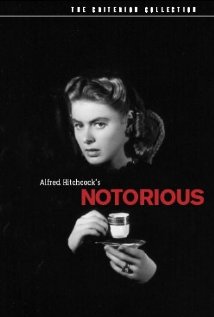 Hitchcock is considered to be one of the movie greats, having moved from silent film to modern cinema, influencing directors and filmmakers around the world. I've been looking for an opportunity to include a Hitchcock movie in my ongoing research on human rights and film, and Notorious seemed to present the opportunity to do so.
The movie is a film noir thriller, combining suspense with romance. It begins with the trial and conviction of a Mr Huberman for treason – a law connection. His daughter, Alicia Huberman (played by Ingrid Bergman (right)), is contacted by one Devlin (played by Cary Grant), and asked to go to Brazil to spy on Nazi friends of her father. (poster credit) US secret agents want to know what the Nazis are doing in Rio. Alicia agrees, and soon Devlin and Alicia begin a passionate affair, unaware of the details of the task. However, Alicia must use her female charms to get herself into the close circle of the leader, Alexander Sebastian (played by Claude Rains). She thus places her love and her life at risk.
The film recalls events in real life:
A number of Americans were prosecuted following the end of the Second World War for treason on account of their participation in the Third Reich. For example, Mildred Gillars and Rita Zucca, known as Axis Sallys, were American broadcasters employed to disseminate Nazi propaganda who were prosecuted by the US.  Mostly famously, 'Tokyo Rose' Iva Toguri D'Aquino, an American citizen, was prosecuted and convicted for treason in 1949 following public outcry over her role in the propaganda programme, the Zero Hour aired on Radio Tokyo.