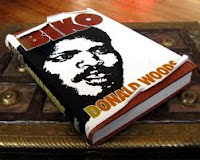 On this day in ...
... 1977 (35 years ago today),in South Africa, as The New York Times' John F. Burns wrote: "Steven Biko, probably the most influential young black leader in South Africa, died while in police detention," an event that, Burns reported, stirred "fears that his death could increase racial tension." According to the BBC, more than 15,000 persons attended his funeral.  It was eventually revealed that Biko, 30, had died not from a hunger strike, as authorities had claimed, but from severe brain damage inflicted during interrogation. Indeed, Biko's death became a rallying point in the movement that led, nearly 2 decades later, to the election of Nelson Mandela as President of a new, anti-apartheid South Africa. Among the accounts of Biko's life and death is newpaper editor Donald Woods' Biko (1978) (above left). It is one of the books that awakened this 'Grrl to the issue of international human rights. (In a post above, IntLawGrrl Stephanie Farrior also pays tribute to Biko.)