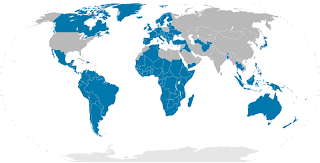 On this day in ...
...1997 (15 years ago today), the Convention on the Prohibition of the Use, Stockpiling, Production and Transfer of Anti-personnel Mines and on Their Destruction was concluded in Oslo, Norway. It's better known as the Landmines Convention, as that's what it bans, or as the Ottawa Treaty, as it's the result of a negotiation process launched in that Canadian capital, outside the U.N. framework, in 1996. The treaty entered into force in 1999, and today has 160 states parties, depicted in blue on the map. (credit) The United States has neither signed nor ratified the instrument.