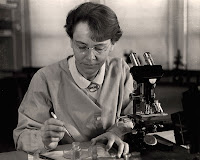 On this day in ...
... 1992 (20 years ago today), Dr. Barbara McClintock died on Long Island, New York, not far from the Cold Spring Harbor Laboratory where she'd done research, alone, for a half century. (credit for 1947 photo of her working at that lab) She'd been born in 1902 in Hartford, Connecticut. By her mid-20s she'd earned bachelor's, master's, and doctoral degrees from Cornell University, where she first taught botany and where, after positions elsewhere, she was Andrew D. White Professor-at-Large from 1965 to 1974.  In 1983 she won the Nobel Prize in Physiology or Medicine "for her discovery of mobile genetic elements." Of this achievement The New York Times wrote:

As Dr. McClintock recounted, her interest in genetics began with a class at Cornell in 1921, when "[o]nly  twenty-one years had passed since the rediscovery of Mendel's principles of heredity."