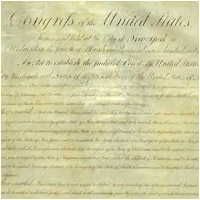 ... 1789, President George Washington signed the 1st Judiciary Act ever passed by the U.S. Congress. It established the framework for a federal judiciary comprising a Supreme Court and lower district and circuit courts, and further detailed the jurisdiction of these courts. Despite some amendments after the Civil War, the framework and jurisdiction today bear much similarity to those set up in this statute. Also of note is a passage in Section 9 of the act, which stated that district courts


'shall also have cognizance, concurrent with the courts of the several States, or the circuit courts, as the case may be, of all causes where an alien sues for a tort only in violation of the law of nations or a treaty of the United States.'

That line remains in the U.S. Code and is known now as the Alien Tort Statute -- a statute that, as Pamela Merchant outlines in today's post above, the Supreme Court is set to re-examine in the Kiobel reargument on October 1, just a week from today.