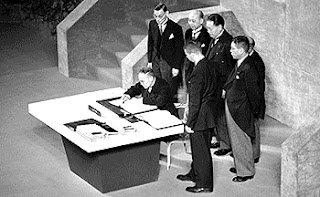 ... 1951, delegates from 4 dozen countries signed the Treaty of Peace with Japan, also known as the San Francisco Peace Treaty in recognition of the city where it was signed. (credit for photo of Japanese Prime Minister Shigeru Yoshida signing at the War Memorial Opera House, as members of his delegation look on) The treaty began with Japan's promise "to apply for membership in the United Nations and in all circumstances to conform to the principles of the Charter of the United Nations," signed in the same city 6 years earlier, and further "to strive to realize the objectives of the Universal Declaration of Human Rights" that states then members of the U.N. General Assembly approved in 1948. The treaty brought to a formal end the Pacific Rim aspect of World War II. It marked too the start of a new, cooperative relationship between, in particular, Japan and the United States.