Reflections on marriage in India & the United States

In a recent International Herald Tribune article, author Nilanjana S. Roy (left) discussed how Indian women’s career aspirations are often overlooked by their families, and many feel pressured to marry and have children.
Roy wrote that India has the lowest percentage of women in the workforce of any Asian country surveyed, with many women leaving work after marriage to stay home with children. By way of comparison:
► The article cited a study by the Indian government which found that in 2009, 47% of Indian women were married by the age of 18. In contrast, a 2012 Centers for Disease Control report found that in the United States, about 4% of women were married before age 18. (These numbers can, of course, be skewed by the fact that, in both countries, some marriages may not be reported to the government.)
► According to the U.S. Census Bureau, the median age of marriage for U.S. women in 2012 was 26.7 years. In comparison, a UNICEF report found the average age of marriage for women in India in 2001 was 18.3 years. (This report noted that figure can vary widely by region. Some regions have similar numbers to the United States.) 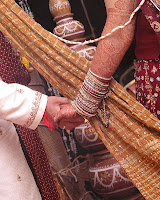 As previously posted, I worked at a law firm in New Delhi in June and July of this year; during that time, I became very interested in Indian culture and the experiences of the women I worked with.
Having made several friends my age, I was able to ask them about the pressure to get married in India and the status boost many women get from being married, and then to compare my experiences and those of my friends in the United States.
Specifically, I was able to observe the culture in New Delhi, the metropolitan capital of India – I recognize that India is a huge country with diverse cultures, religions, and viewpoints. My Indian friends live in New Delhi, but they are from different parts of India. It is hard to say whether they represent their hometowns or the culture in New Delhi, or perhaps a mix of both. Similarly, it is difficult to tell if my own opinions are based on being American, or Southern (I was born and live in Georgia), or both.
Additionally, many people may not consider the pressure to be married and stay home with children to be a "problem" at all. Promoting marriage is, arguably, beneficial to society as a whole in any country. The problem I see is when it comes at the expense of an individuals' own goals or dreams.

With those caveats, in this post I share my observations and comparisons.
► One of the most striking differences between Indian and U.S. marriages is the idea of arranged marriage.

In the United States, the idea of "love marriage" dominates the culture – marrying for love, not family. Though love marriages do occur in India, many families find a partner for their unmarried children. It is becoming more common to let the couple meet and consent to the marriage beforehand, especially among the middle and upper classes. I can imagine, though, that if my family were to choose a partner for me and then begin wedding preparation, I would feel enormous pressure to consent in order to make my family happy. As an example, my unmarried Indian friend Jaya wrote to me in an e-mail that her family doesn't


'pressure me for anything, but even I know that I will have to get married as this Indian society won't let people live [singly]. I wanted to go for love marriage but now have made up my mind to go with my parents' choice. Hopefully I will get a guy of my type. But it's not that if I don’t get a guy who fulfills all my criteria, I'll not be getting married.'

► In India, marriage is not only valued and encouraged, but it is highly visible and glamorous.

In the United States, married women are identifiable by a ring, often a diamond (to symbolize engagement), a plain band, or both, on the ring finger of their left hands. (credit Kelly Wegel for above right photo of American bride)

In India, married status is literally written on women’s faces. Many married women wear a line of red powder on their foreheads, called Sindoor (vermillion), starting from the part of their hair and ending in the middle of their foreheads. Some women just have a little red powder at their hairline, but some make the mark very pronounced. This is different from a bindi, the dot or jewel worn in the middle of the forehead or between the eyes, and the two can be worn at the same time. A woman’s husband puts the Sindoor there for the first time during the wedding ceremony, and the woman can then apply it herself every day if she chooses. (credit Shamikhfaraz for photo at left, of Sushma Swaraj, an Indian politician of the Bharatiya Janta Party and Member of Parliament, wearing the Sindoor in the part in her hair to symbolize that she is married, and wearing a bindi in the middle of her forehead)
The Great Indian Wedding is a huge part of the culture. Brides get mehndi – the drawings on their arms, hands, legs, and feet done with temporary dye made of henna. They wear elaborate red saris and gold jewelry, and they are the objects of everyone’s attention during a party that lasts for days. Even after marriage, there are certain things only married women get to wear or do. The thing I coveted the most while in India were the red bangles worn by new brides for a year after getting married in the Punjabi tradition. (credit Clickmehul for top right photo of bangles on a bride's arm)
When I asked my Indian friend Priyanka about marriage via e-mail, she told me:


'Marriage is nice, no doubt. It gives you certain rights . . . , which I eventually desired in my relationship with [my husband] . . . I think India still needs another 50 years to accept [unmarried couples living together] socially, but our minds are so influenced by the great Indian wedding, that secretly all women dream to be a bride with mehndi, bangles, and bright colors.'

I have an American friend, Lauren, who will soon be a bride in her own Great American Wedding. As in India, Lauren could enjoy a sort of status boost here after being married (depending on her community) – whether it is within her family, her church, or her circle of friends. Even in a career setting I have gotten the feeling that some employers see a married person as more responsible, traditional, and conservative than unmarried peers.
Most notably, many women in the United States have pressure from their families to marry for religious reasons – namely, the pressure not to live together or have sex until marriage. American TV shows would have the world believe differently, but many U.S. families, especially in the Southeast where I live, have strong beliefs against “living in sin,” that is, living together and having sex before marriage.
My American friend Shirley confirmed this recently in an e-mail, when she wrote that


'the look in peoples' eyes changes from skeptical to serious when you introduce your partner as a spouse [as opposed to your "boyfriend"]. . . Let's not even mention the idea of buying a house, taking out an auto loan, having a child, etc. – all of these things are taken seriously when you are married. Marriage gives that bank lender, or whoever, an idea of stability.'

In her IHT article, Roy pointed to the presence of female role models as the best way to show women and their families that women can have careers in addition to, or without, marriage. (credit for top left photo of Roy) Areas with at least one female in power for at least two years showed a big difference in attitudes compared to towns with no female leaders. Parents were more willing to envision careers or a nontraditional path for their daughters if there was a female exemplifying that nontraditional route.
Coincidentally, that is exactly what an interviewer from an American law firm recently said to me.
I interviewed with a firm in Atlanta that enjoys a strong reputation for hiring women, retaining them through marriage and childbirth, and promoting them to partners. The male partner I spoke with said he thought every other tactic – daycare, flex time, etc. – paled in comparison to the power of female role models in the workplace. He said that now his firm's largest area of concern is retaining African-American women and getting them to positions of power within the firm.
I am fascinated by how far American and Indian societies have come in attitudes about women in marriage and in the workplace – and by how far they both have to go.
by Unknown at 6:00 AM