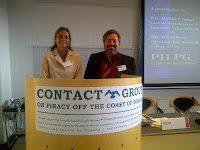 On September 17-18, 2012, I had the opportunity to attend the 11th meeting of the U.N. Contact Group on Piracy off the Coast of Somalia, Working Group 2, in Copenhagen, Denmark. Professor Michael Scharf of Case Western Reserve University Law School and I, in our capacity as independent academics as well as members of the Public International Law and Policy Group, Piracy Working Group, were invited to give a presentation at the Working Group 2 meeting. (We're pictured above left, and below with Ambassador Thomas Winkler, the Chair of Working Group 2.)
Our topic was juvenile pirates – the treatment of detained juvenile pirates by the capturing and/or prosecuting state, as well as the need to aggressively detain and prosecute those who recruit juvenile pirates. Our brief presentation was followed by an intense question-and-answer session, during which we attempted to answer many provocative inquiries addressed at us by the delegations of more than 50 states represented at this meeting.
It was our recommendation that juvenile pirates should not be caught and released, but that instead they should be prosecuted under special circumstances, taking into account their age as well as the possibility to retrain, re-educate and rehabilitate them.  If juvenile pirates are released, they should not be simply "dumped" on the shore of Somalia; instead, every effort should be made to contact their family members for the purpose of reuniting them.
It was also our recommendation that those who affirmatively recruit juvenile pirates should be treated more harshly: for example, that the use of juvenile pirates would be an aggravating factor in sentencing. Another innovative approach would be to argue that the use of juvenile pirates is a crime against humanity, citing international criminal tribunal precedents in which the accused were convicted of of child-soldier recruitment. 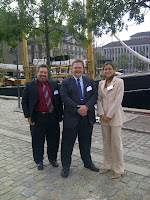 In addition to our presentation on the issue of juvenile pirates, Working Group 2 members discussed several other important topics. The meeting started with updates by member states on any developments regarding their own experiences in combating Somali piracy in the last six months. Some such notable developments include:
►the first-ever post-conviction transfer of Somali pirates, convicted in the national courts of the Seychelles, to Somaliland, where they will serve their entire sentences;
►the first-ever extradition of detained pirates from the Seychelles to the Netherlands for the purposes of prosecution in the Netherlands;
►the signing of transfer agreements between Mauritius and several maritime nations, whereby Somali pirates captured by the latter will be transferred to Mauritius for prosecution in this country’s national courts;
►the update by Kenya that a long-awaited appellate judgment, which could effectively restart piracy trials in Mombasa, will be rendered at the end of September.
Working Group 2 members then discussed various human rights considerations linked to the detention and possible prosecution of suspected Somali pirates.

This discussion was followed by updates by the European Union and NATO representatives on their own efforts to detain suspected Somali pirates and ensure that such individuals are prosecuted in the courts of an able and willing nation.
Finally, the second day of Working Group 2 meetings was devoted to legal issues linked to the use of private security companies and private armed guards aboard merchant vessels. These issues will likely require further discussions, reports and assessments by states as well as various organizations involved in the global fight against Somali piracy.
To conclude, various additional issues arose through these informative discussions among member states at the Copenhagen meeting. Among such issues are the following: the possibility of prosecuting the crime of conspiracy to commit piracy; the possibility of prosecuting those who aid and abet piracy on land; the need to establish a global database of piracy prosecutions currently ongoing within various national jurisdictions; the possibility of enacting national legislation to enable the seizing of assets derived from the proceeds of Somali piracy.
It is my hope to continue to work on some of these issues and to assist Working Group 2 in its future efforts to combat Somali piracy through detention and prosecution of suspected pirates.
by Milena Sterio at 6:00 AM