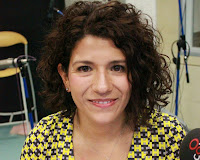 It's our great pleasure today to welcome Mónica Roa (right) as an IntLawGrrls contributor.
Mónica is Programs Director at Women’s Link Worldwide (prior posts here and here), a not-for-profit human rights organization based in Colombia and Spain that seeks gender justice throughout the world. She views the judiciary as a pivotal branch in democratic society and has worked at Women's Link to foster greater dialogue between civil society and the courts on how to interpret rights from a gender perspective.
In 2006, she successfully argued before the Constitutional Court of Colombia to overturn the country’s restrictive ban on abortion.  Mónica was named "Person of the Year" by leading media outlets in Colombia in 2005 and 2006, and was recognized in 2011 as one of the ten most important leaders in Colombia. She has also faced threats to her life, as recently as this year, for her work on reproductive rights.
Mónica holds a law degree from the University of the Andes, Bogotá, Colombia.  She earned her Master of Laws (LL.M.) as a Global Public Service Law Scholar from New York University.   Mónica teaches at the Academy on Human Rights and Humanitarian Law at the American University, Washington, D.C. College of Law.  Her publications include: "Bodies on Trial: Sexual and Reproductive Rights in Latin American Courts" (2002) and "Litigating Reproductive Rights at the Inter-American System for Human Rights" (Harvard, 2003).
In honor of International Right to Information Day, in her introductory post below, Mónica discusses a recent, landmark case in the Constitutional Court of Colombia regarding the right to access complete and impartial information from the government. 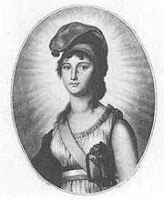 As have other contributors (prior posts), Mónica has chosen to honor Olympe de Gouges (right) as her international law foremother. (image credit) Mónica writes of this French feminist who lived from 1748 till she perished beneath the guillotine in 1793:


'My job is to work so that justice is adjudicated with a gendered perspective. I think of her every time that I demand equality and justice for women and some would like to behead me. So far we have come, so far we still have to go.'

Heartfelt welcome!
by Jaya Ramji-Nogales at 8:30 AM

She is brave, tolerant and committed.

In a country where violence has been a part of our lives for so long, tolerance is not seen often. This then is a new trait and should be followed more and more. Maria-Isabel Plata